Portland, Ore.-based Ontier just announced a new tool called Pixetell at the DEMO conference in Palm Desert. Judging from its demonstration, Pixetell has the richness of web meeting services like Cisco’s WebEx and the convenience of email — in fact, the DEMO program book describes Pixetell as “a little WebEx in your inbox.”

Pixetell is one of those products that sounds a little fuzzy at first, but really grabs your attention (or mine, at least) once you see it in action. Basically, it allows you to use screen recordings, voice, web cam, rich text and other attachments to enrich emails and related documents — spreadsheets, designs, proposals and so on. And it allows you to add these things as part of your normal workflow, using a simple dashboard that appears at the bottom of your screen.

What made the biggest impression in Ontier chief executive Sebastien Rapport’s presentation was Pixetell’s speed. For example, Rapport was able to record an audio explanation for adding more information to a spreadsheet and send it off to another team member in just a few seconds. This simplicity and speed becomes particularly attractive when you’re trying to make decisions, a process that often occurs very inefficiently over email. For example, Rapport was able to propose a new design for a web page, then get detailed feedback from team members in video form whenever they were available to offer it. It’s like holding a meeting to discuss and approve the web design, but without trying to herd the entire team together at once.

Ontier has raised an undisclosed amount of angel funding. 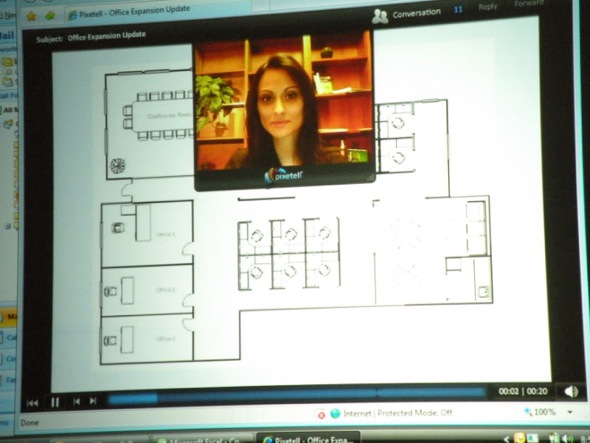