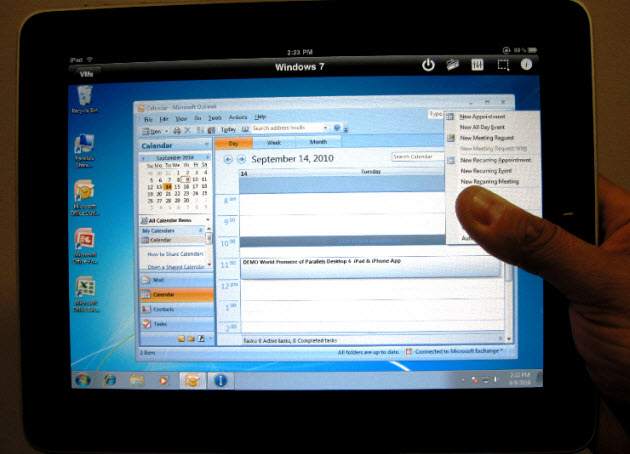 Parallels is one of 70 companies chosen by VentureBeat to launch at the DEMO Fall 2010 event taking place this week in Silicon Valley. After our selection, the companies pay a fee to present. Our coverage of them remains objective.

Parallels, the Renton, Wash.-based maker of virtualization software, is unveiling a new app to bring remote desktop capabilities to the iPad and iPhone with a new app that it will unveil Tuesday at the DEMO Fall 2010 conference in Silicon Valley.

The free Parallels Mobile app will let you log into a Parallels account and then browse your Parallels-equipped computers at home. You can run the applications on those computers remotely, using the Parallels Desktop 6 for Mac software, which lets you run Windows or Mac apps simultaneously. This means that you use your iPhone or iPad to open an Excel spreadsheet while on the go, simply by activating the Windows version of Excel that is sitting on your desktop computer at home.

Jack Zubarev, president of marketing and alliances for Parallels, said in an interview that the free mobile app is aimed at making virtualization more convenient for users, who have been clamoring for iPhone-compatible versions of Parallels. (The app runs on Apple’s iOS mobile operating system, which means it also runs on the iPad and iPod Touch.)

The free app could also motivate users to buy the Parallels Desktop 6 for Mac that went on sale last week.

Users can now get access to Windows apps such as Outlook or Internet Explorer, which, intriguingly, can be used to browse Flash-based websites on an iPad. The lack of Flash is a well-known limitation of Apple’s mobile devices. You could also access Windows-only games on your iPad, though you would still have to worry about how well the typical keyboard-and-joystick interface matches the iPad’s touch interface.

The app will make the iPad into a much more useful device, given limitations such as its inability to run Windows under normal conditions. Parallels already has about 73 percent of the Mac virtualization market, according to market researcher NPD.

Parallels holds or has filed more than 100 patents that enable its products and services. The company was founded in 1999 and it has 750 employees. Rival products include VMware Fusion. Parallels is profitable and has grown revenues at a 50 percent-plus annual rate for the last four years. It has millions of users.

Parallels investors include Intel Capital, Bessemer Venture Partners, Insight Venture Partners, Almaz Capital Partners and Siguler Guff Investments. Total funding raised is less than $25 million. The app will be live in Apple’s App Store at noon Pacific time on Tuesday, September 14. Check out the video of the app below: