Sixteen startups intend to break out big with consumers in the Consumer Technologies category at theDemo Fall 2011 conference in Silicon Valley. Here are two companies that presented today. 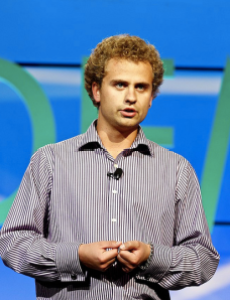 Pinevio is a tool that works with your social networks to help you find stuff that you might like, even if your friends don’t share your interests.

For example, if you’ve got a fascination with sharks, you may have posted many links to shark videos on your Twitter and Facebook feeds. (Pinevio also works with Tumblr, YouTube and other social networks.) Pinevio would notice your predilections and suggest shark videos posted by other people, including many who you are not already following. The stream can be filtered so you can restrict it to video, images, or audio, or drill down to specific people.

“We will disrupt and democratize content distribution,” said Mindaugas Krisciunas, the co-founder of Pinevio, which launched today at Demo.

The company is based in Newcastle, U.K. and has raised 14,600 UK Pounds in funding from the Difference Engine, a business acceleration program; and 10,000 Euros from the founders. 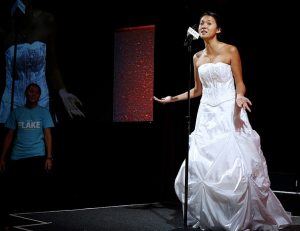 Fei Xiao, the co-founder of Los Angeles-based truRSVP, can’t stand flaky people. She even took the Demo stage dressed as a bride whose groom flaked on their wedding. That’s why she and fellow University of Southern California students Grady Laksmono and Anna Sergeeva created truRSVP.

A Demo Alpha company, truRSVP’s technology aims to provide real estimates of how many people will attend an event. The founders say the goal is to increase the accuracy of RSVP’s, essentially telling you who’s a flake and who you can depend on to show up.

This introduces a new element of accountability to online invites. The company hopes to challenge Facebook Events and existing online event planning companies like Evite and PunchBowl.

Backed by OrganicStartup, the venture acceleration effort of angel investor Scott Sangster, trueRSVP combines priority invites, special algorithms and mobile apps. Its biggest challenge is going to be building a user base that generates enough invitations to take advantage of their “who will flake” prediction technology.