PublicStuff is one of 70 companies chosen by VentureBeat to launch at the DEMO Fall 2010 event taking place this week. These companies do pay a fee to present, but our coverage of them remains objective. 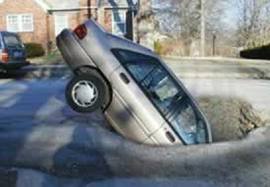 Anybody who walks around their town notices things that could be fixed, including potholes, sidewalks, or even buildings. The traditional way of dealing with this: a phone call to city hall — or maybe an email in more advanced burgs. PublicStuff, a new startup, is looking to ease such communications between municipalities, universities, and other local operations and their communities.

PublicStuff is unveiling two Web-based tools today at the DEMO conference in Silicon Valley. One is for the general public to report and request services. The other is for local governments to see inbound requests as well as manage and track request completions.

For example, a consumer could request that a pothole be fixed on a specific street and check in to see the status periodically. A user could also see other requests or services submitted by community members. From the other side, the local agency can receive the pothole request and process it more efficiently than dealing with an overload of paperwork.

Both tools are available as iPhone, Blackberry, and Android apps. Users can also text message or call a toll-fee number to make a request or file a report.

The company sees its main competition as large CRM software providers that serve the public sector, including Oracle and SAP. Another rival is City Sourced.

The New York City-based company, founded in 2009, has taken an undisclosed seed round of funding from Investor Circle Philadelphia.