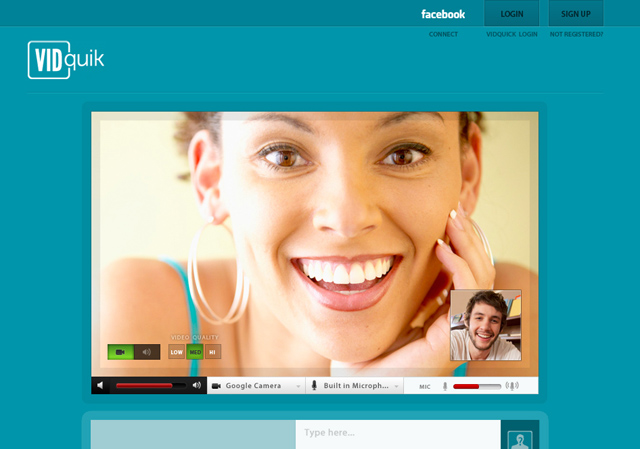 Many companies are currently trying to dominate in the online meeting space, but Vidquik thinks it can triumph by starting small and building a following by giving away the basic components for free.

Palo Alto, Calif.-based Vidquik is showing off its “no-hassle” web conferencing service at the DEMO Fall 2011 conference Tuesday. This week the public beta of the product goes live with the ability to use free 1-to-1 online video and slideshow presentations.

Bernard Moon, CEO of Vidquik, said in an interview there several factors that set Vidquik apart from rivals like Cisco’s WebEX, Citrix’s GoToMeeting and Adobe’s Connect. Unlike the others, Viquik has no downloads or plugins. One user simply sends another person a link and he or she is inside the conference.

“WedEx and GoToMeeting are the big gorillas in the room,” Moon said. “We know a lot of people use them, but there’s a lot of users we can pull from them too.”

I also asked Moon if he had heard of online meeting startup MeetingBurner, a promising service I outlined in mid-August, but he said he had not checked it out. When it comes to free offerings, I think MeetingBurner looks stronger for collaboration because it can broadcast video one-way and show slides to up to 100 persons and offers a similar level of simplicity to Vidquik. But on the other hand, Vidquik is a stronger service for 1-to-1 video presentations because a sales person can actually see the facial reactions of the person they’re selling to.

The company will also have to compete with AnyMeeting, a free conferencing solution that allows you to show a presentation live to up to 200 people. Unfortunately, the service is ad-supported, an element can potentially harm the content and seriousness of a presentation.

Moon said the product is initially targeted at sales teams and salespeople, who use the web frequently for 1-to-1 presentations and video conferencing. Moon said the reason Vidquik is starting with just 1-to-1 is because Cisco and Citrix have told him that nearly 70 percent of people using their software engage using 1-to-1 conferencing rather than larger ones.

“We see this product mostly used for sales right now and then growing out,” Moon said.

So far, the company is self-funded, with nearly $400,000 being fronted by it founders — all of which are serial entrepreneurs. Besides Moon as CEO, the company’s other two co-founders are CTO Jae Song, a multi-disciplined engineer, and COO Jason Song, former President of Illuminique Skin Care.

Vidquik is one of 80 companies chosen by VentureBeat to launch at the DEMO Fall 2011 event taking place this week in Silicon Valley. After our selection, the companies pay a fee to present. Our coverage of them remains objective.