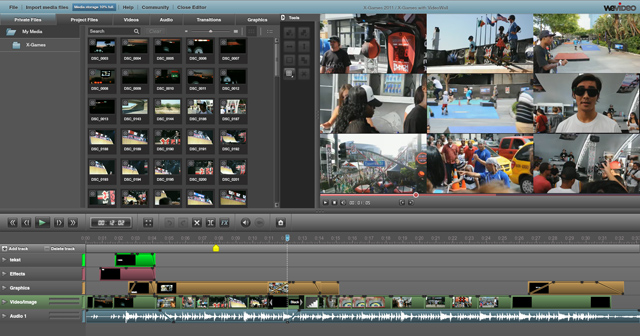 If you ever wished you could edit videos from any browser or any device, the just-launched cloud video editor WeVideo just might be your ticket.

WeVideo, which debuts at the DEMO Fall 2011 conference Tuesday, offers up a powerful Flash-based video editing application accessible from any browser, and soon, will be adding native applications on all manner of mobile devices. Because it is in the cloud, it lets several people access and collaborate on projects.

“This is one of the most powerful cloud-based applications on the web,” WeVideo co-founder and CEO Jostein Svendsen told VentureBeat. “It was built ground up from the cloud and lets you do an incredible amount of complex tasks in the browser.”

The 15-employee company was formerly known as Creaza in Europe, but as Creaza it was focused on offering an education product. Creaza still has an education product, but WeVideo is a different venture. The name change to the WeVideo branding specifically came from the desire to aim it at consumers and communicating what the service offers in the name itself.

“It’s a lot of work to re-brand your company,” Svendsen said. “But we wanted to emphasize that this is about sharing and editing video projects in groups.”

Svendsen said that its closest competitor was JayCut, but he said the company has gone silent since it was acquired by Research in Motion back in July. Now, the company says it will compete with online video editor Animoto and YouTube’s free video editor. Svendson said what makes WeVideo better is its depth of tools, the amount of devices it can be accessed though and its ability to support most digital video formats.

The service offers several levels of pricing, with a free tier focused on low-demanding consumers all the way up to $79.99/month tier that focuses on professional-grade editing. The pricing is as follows:

Sunnyvale, Calif.-based WeVideo is self-funded, with the co-founders ponying up a total of $1.4 million, a sign that they truly believe in their product. Svendsen also said the company is in talks with “some of the largest VC funds” in Silicon Valley, with a new funding round in the process.

WeVideo’s first video promoting the product can be viewed below:

WeVideo is one of 80 companies chosen by VentureBeat to launch at the DEMO Fall 2011 event taking place this week in Silicon Valley. After our selection, the companies pay a fee to present. Our coverage of them remains objective.