Privacy may be an illusion. But it’s still disturbing when someone really figures out how to get the goods on just about anyone.

Intelius is launching iSearch, a new “people search” function today that lets you dig up some sensitive information on just about anyone. You don’t need a private investigator to do this anymore. It’s free, at least for the easy stuff. If you want to zero in on the most interesting information, the odds are strong you will have to pay a fee.

You simply type in what you know about someone and iSearch searches public records to find out more. This kind of powerful search is a double-edged sword. A stalker could use it to get a target’s exact address. Creepy. But you could also use it to check to see if your babysitter has a criminal background or if your neighbor is a known pedophile.

John Arnold, co-founder and executive vice president of Intelius in Bellevue, Wash., said the company is trying to respect the social norms on privacy. He said the company is only digging through publicly available data. In the past, this data has come at a cost. You had to pay a lot for it, so it wasn’t likely that a wacko on the street could get it.

You still can’t get some data. Under the Fair Credit Reporting Act, you need to show a financial reason to run something like a credit check. But it’s pretty easy to get addresses for anyone. Arnold said that such information is usually available in the White Pages. For $4.95, the company will pass along an address. For a criminal background check, it charges $49.95. 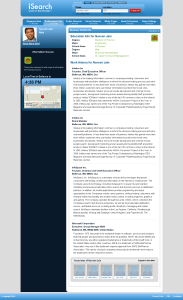 But it’s surprisingly easy to dig out data such as bankruptcy information, which in the past has been offline in paper records. The company can also glean cell phone numbers by buying data from phone companies. For instance, the company can get CallerID data.

If you’re worried about this, you need to take a proactive stance to protect your privacy. Arnold said he would respect the wishes of people who want to have their data deleted from the database. But he reiterated the pointlessness of that if your data is already in public records. He noted that his company will commonly delete sensitive data, such as addresses of police officers or photos of government agents, as it gets requests to do so.

“As societies evolve, so do our concerns about privacy,” Arnold said. “Society may not have been ready for this five or ten years ago. People now have some comfort with looking up someone. Again, we are talking about publicly available sources here.”

Arnold noted there was protest when his company uploaded phone listings to the Internet a decade ago. But now people accept it. You can get some basic information for free. But if you want to go deeper, then you have to pay for a premium service. Arnold said this isn’t the equivalent of a digital private investigator. It doesn’t involve surveillance; it’s more like a court researcher or librarian.

The service competes with all of the search engines out there as well as paid investigative services. Arnold said the service is necessary because search engines fail, particularly on common names, where you get hundreds of thousands of results on a name search.

The company was founded in 2003 as a broker of information technology. It has used revenues from its paid search businesses to drive the development of the new search engine, which is for a wider range of customers. It has 170 employees and has not raised any venture money. The iSearch service is available. Yes, these guys get the award for a useful but creepy service.