Sometimes information is worthless if you don’t have it at the right place and time. When you’re on a diet and looking for a restaurant, it would be great to know what meals you can get nearby and the calorie counts that go with them.

That’s the kind of data you can get on your cell phone from WebDiet, a mobile service that’s debuting today at DEMOfall 08. The service will send you suggestions for meals that you can order on your phone and have ready for pickup as you get to the restaurant. And the suggestions can be tailored to your own diet. 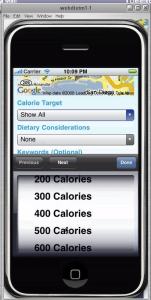 The Las Vegas company has a service dubbed MealSearch that tells you the calorie count of what you’re about to order and offers you options, like what happens to the calorie or carb count if you don’t eat the buns for your hamburger.

The service uses wireless, global positioning system, and smartphone messaging technologies to give you real-time meal guidance. You can then tell the program what you’ve eaten so that it can make suggestions for the next meal if you’re trying to stay on a precise calorie count for the day’s meals. You can tailor the suggestions to support diets such as low calories, low carbs, low sodium, vegetarian, kosher and other choices.

It’s the brainchild of self-help bestselling book author Craig Gold and Wendell Brown, a serial entrepreneur. It was founded last year and has 12 employees. It is self-funded so far, but the company plans to raise a round this fall.

They note that 50 million people eat at fast food restaurants every day in the U.S. WebDiet has a collection of custom meal suggestions for healthier choices, even at chain restaurants. Some of the tips for meals are off-menu items. For now, the service has calorie data on the chain restaurants, but not on the stand-alone restaurants. 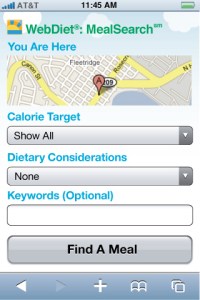 The company is starting an invitation-based beta now and will be open to the public in the fourth quarter on smart phones, including the iPhone. The company welcomes developers who can integrate other functions into the WebDiet platform. Other services beyond MealSearch are expected to debut later.

The service seems useful but could be even more so if they figure out ways to skip the data entry. I don’t want to enter all of the calorie counts for every meal I consume. I get the feeling that this service is going to get better over time.

On the phone, you can scroll through the meal selections and pick which one you ate. At some point, you will be able to take a camera phone picture of a bar code for the food you’ve consumed, if there is a bar code. The image is compared to a database and the service notes that you’ve eaten the item. In the future, the company will try to offer users branded diets (such as the South Beach Diet).

Services such as Yelp can tell you where the nearest restaurant is and what kind of reviews it has gotten. But it doesn’t have the granular data on health ratings or calorie counts. There are other existing diet software programs for mobile phones such as DietOrganizer, MyFoodPhone, and Diet.com. WebDiet is trying to outdo those companies by getting health data on thousands of restaurants. The company also counts as secondary competitors: WeightWatchers.com, JennyCraig.com, Nutrisystems, and Herbalife.

Brown has started and sold a number of companies in the past. He was cofounder of Teleo, a voice-over-Internet-protocol (VoIP) software comany that Microsoft bought for an undisclosed price (under $100 million) in 2005. He was cofounder of CallCast in 2001. That company outsourced call center operations and merged with LiveOps in 2002. It was then acquired by AOL. Gold is author of the book, “Open Your Mind, Open Your Life,” which has sold 500,000 copies.

Click here for all of our DEMO/TechCrunch 50 Conference coverage, including special posts that aren’t on the main VentureBeat page.