“Demoralized” is how one government source described the feeling shared by 15,000 EPA coworkers after President Donald Trump today banned them from using Twitter.

The sudden prohibition was part of a larger media blackout and a freeze on any new contracts or grants. “There are news outlets that cover EPA,” the source said, predicting defiance to the gag order. “They are getting their fill of leaks.”

The order effectively defenestrates the EPA’s public affairs office. Effective immediately they’re being instructed to forward all media inquiries to the Office of Administration and Resources Management for review, according to the Associated Press. The Twitter ban came on the same day that Trump issued an executive order to allow the controversial Keystone pipeline to move forward.

“The actions over the last two days have shown a real misunderstanding of the actual work of the agency, incompetence, and a disconnect between the Trump team on the ground now and the incoming Pruitt team,” said the employee who requested anonymity out of fear of reprisal. “EPA staff who have dedicated their lives to protecting human health, clean air, and water are feeling demoralized.”

The Trump team’s communication to the agency bypassed the EPA’s top brass and sends a not too subtle message to the agency’s leadership. “The freeze on funding was not conveyed directly to staff.  Most learned from press reports. The communications embargo was communicated poorly.  Some got the full rundown. Some did not,” the employee said.

Trump’s ban on Twitter usage is ill-conceived. The EPA’s Twitter handle is used mainly to promote the good work underway and to issue public safety information. “The idea of bad stuff being tweeted from EPA was not likely,” the source said.

.@GinaEPA shares a report about actions taken by the agency under the Clean Air Act during the last eight years. https://t.co/6RRF8WWCj1

If you see or smell smoke from your wood-burning appliance, you may have a problem. Protect yourself from smoke: https://t.co/fAqL7Dyfjd

“The EPA Twitter feeds are more about advertising good stuff they do,” the source said. “The best things about tweeting was that they could quickly get good stuff out.”

Similar bans on external communications at the Agriculture and Interior Departments have been made by the Trump administration. But in a sign of things to come from the EPA, the Badlands National Park today disobeyed the new president’s ban on using Twitter: 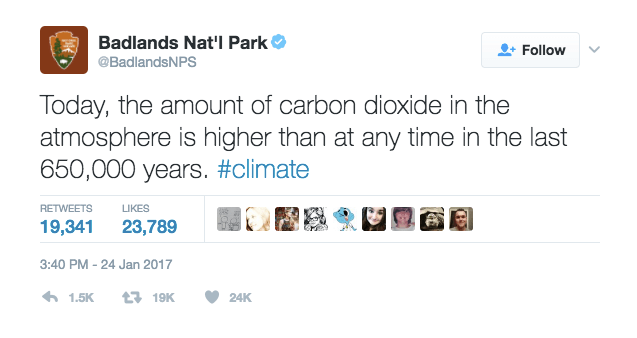 Such small acts of disobedience may be inevitable with each turn of the screw by Trump, and unauthorized tweets by federal agencies may be only the beginning. The source warns, “People may find other ways to describe bad stuff happening there.”