Last year, Marc Hemeon and Bjoern Zinssmeister had a vision to provide freelance designers with the resources to monetize their worth. Design, Inc. was intended to be the “operating system for designers,” so entire businesses could be run through the service. At the time, the process was akin to 99designs, in that companies would list out what they wanted created and then designers would create it.

Hemeon, the cofounder of Google-acquired fflick, and Zinssmeister, a former senior engineer with Match.com, discovered that oftentimes, customers didn’t really know exactly what they wanted and that they often requested more work over time. The problem was, what Design, Inc offered just wasn’t scalable. On Tuesday, the company formally announced it has pivoted away from a 99designs-like approach to become a marketplace where companies submit their Request for Proposals (RFPs) and are matched with qualified designers — think of it as akin to ODesk. 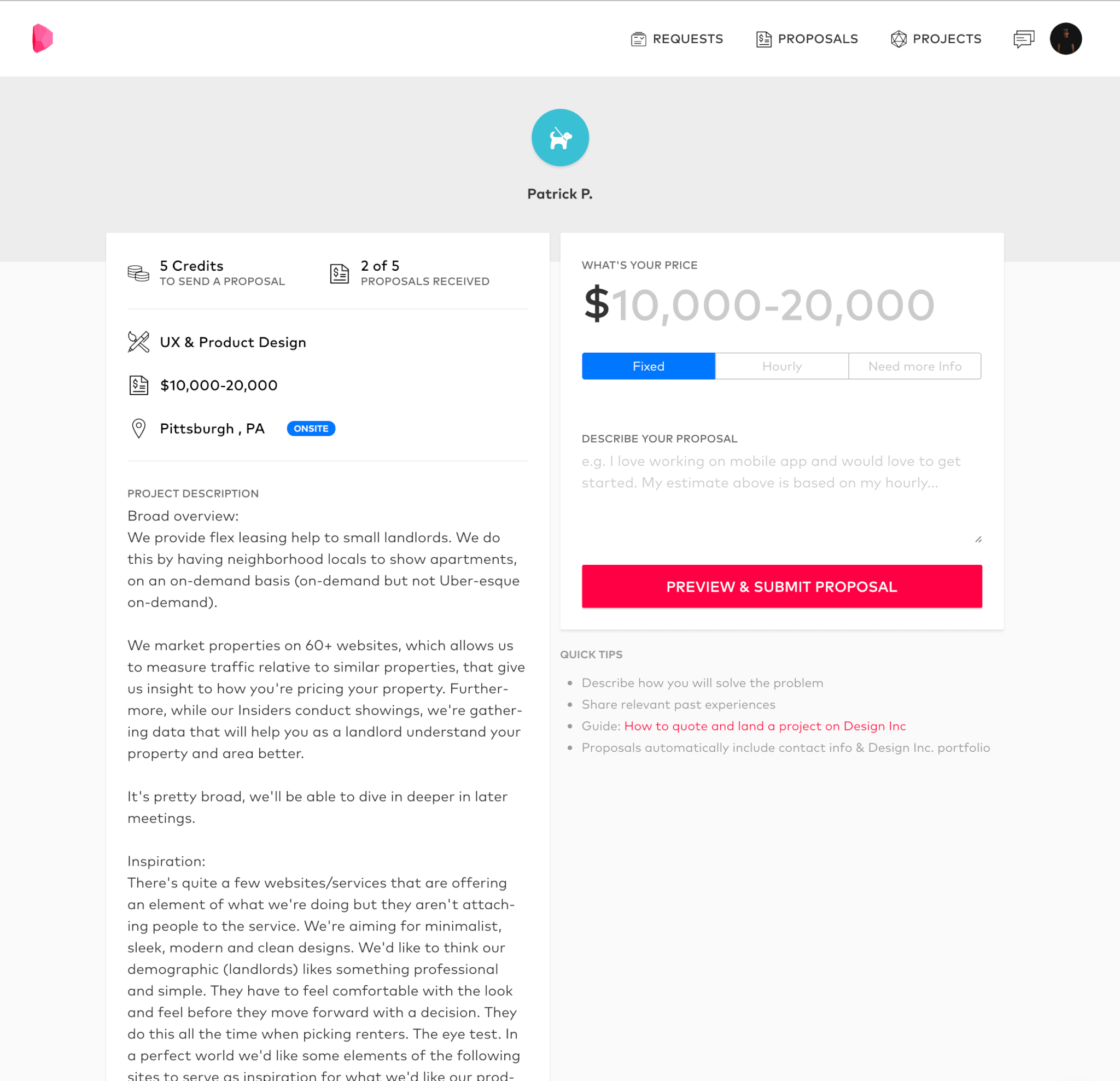 Above: How to submit a proposal within Design, Inc. to attract potential designers.

“We thought we could make an online transaction,” Hemeon explained. “We learned we could not make an online transaction for something that happened offline. If you hire a designer, you’re going to have coffee and work with them. You can’t actually pin down the dollar amount…we were trying to capture these large dollar amounts on our platform. Turns out that no one would use the platform. We would make the introduction…and the dollar amount agreed to wasn’t the same as they had on the platform.”

With the new iteration of Design, Inc. — which soft-launched in December — companies submit their proposal and usually within minutes, up to five designers respond with their bids. Companies select one they like to begin negotiations with or resubmit their RFPs to receive additional proposals. Uploading an RFP is free, but designers pay between $5 and $36 per submission for a chance to talk to the company.

After a designer has been selected, the conversations can be taken offline. What Hemeon and Zinssmeister hope for is a relationship in which both designer and client are able to work together and better understand the project needs. And projects can vary in scope, from designing PowerPoint presentations to icons, illustrations, logos, magazine layouts, websites, and more. The exact specifications of the work will be outlined after the matchmaking process. 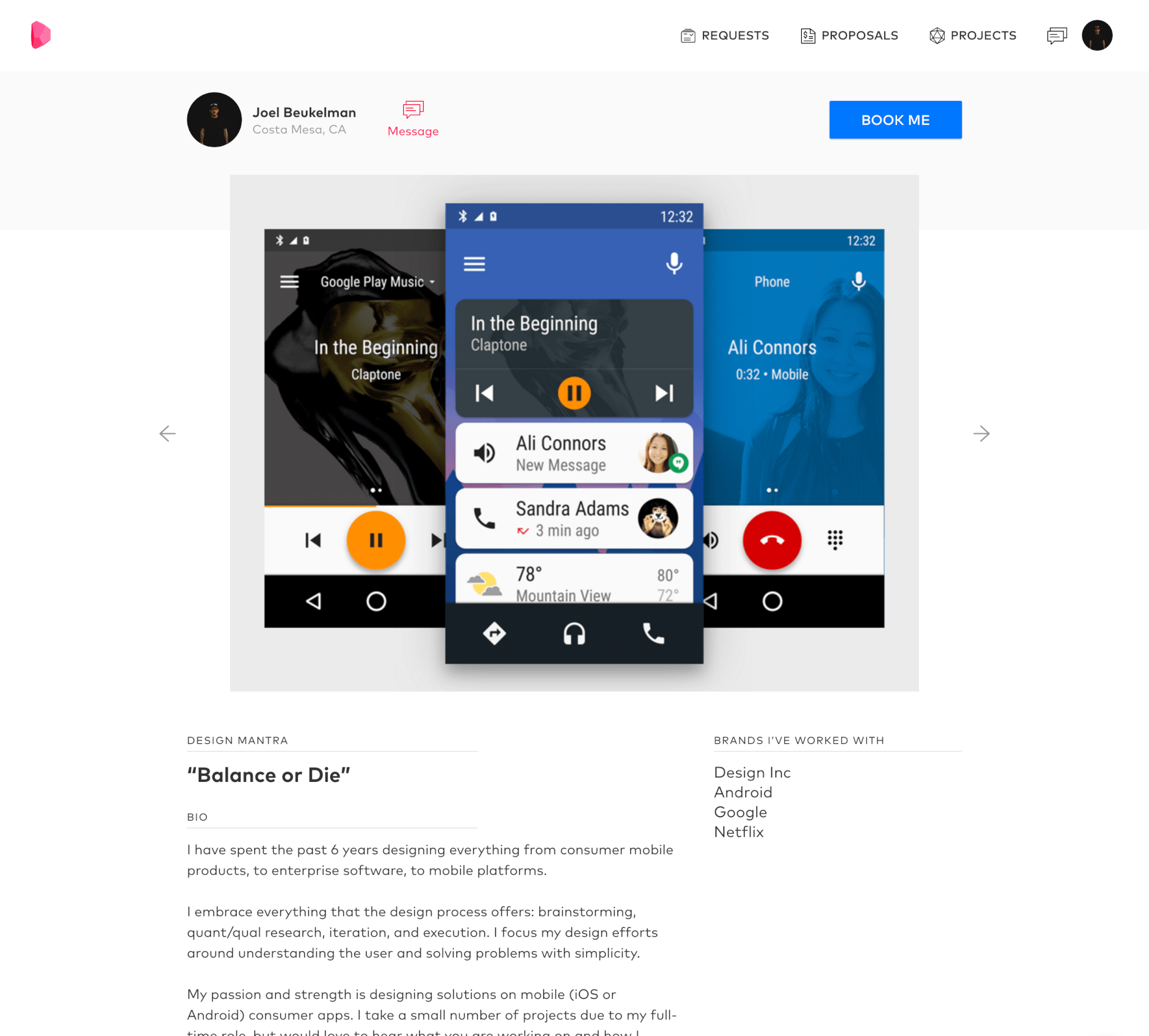 Above: How designers submit their proposals to clients for bids within Design, Inc.

Design, Inc. is appealing to graphic designers as well as other creative professionals, including those specializing in industrial design, filmography, photography, videography, 3D artistry, and more. The company acknowledges that the current brand is a bit limiting but hopes to eventually go “super broad” in terms of who has access to the service.

Hemeon wants to match great designers with those who need compelling design. “People need folks on demand,” Hemeon explained. “We can make it happen…why are you going to spent $180,000 [hiring a full-time designer], when you just need someone great for a couple of months?”

Those who rely on Design, Inc. are promised quality designers — Hemeon’s team handpicks which ones should be added to the service. And should the work be sub-par, the company shared that it will do right by its clients, which in the past has resulted in the company doing the work themselves. “If you have a great relationship with us, you’ll come back. It’s greedy to capitalize on the nickle and dime opportunity,” Hemeon stated. There is a “no asshole rule,” meaning that if you’ve provided poor service, been cantankerous, or ghosted on a project, you can be booted off Design, Inc. — this applies to both designers and clients.

Currently, more than 2,000 designers are on the platform, with 5,000 more on the waiting list. Design, Inc. already has more than 400 companies submitting proposals with more than $1 million spent on freelancers in the last six weeks. The company also has a goal for the year: helping 10,000 creative people make a living, no matter where they are. 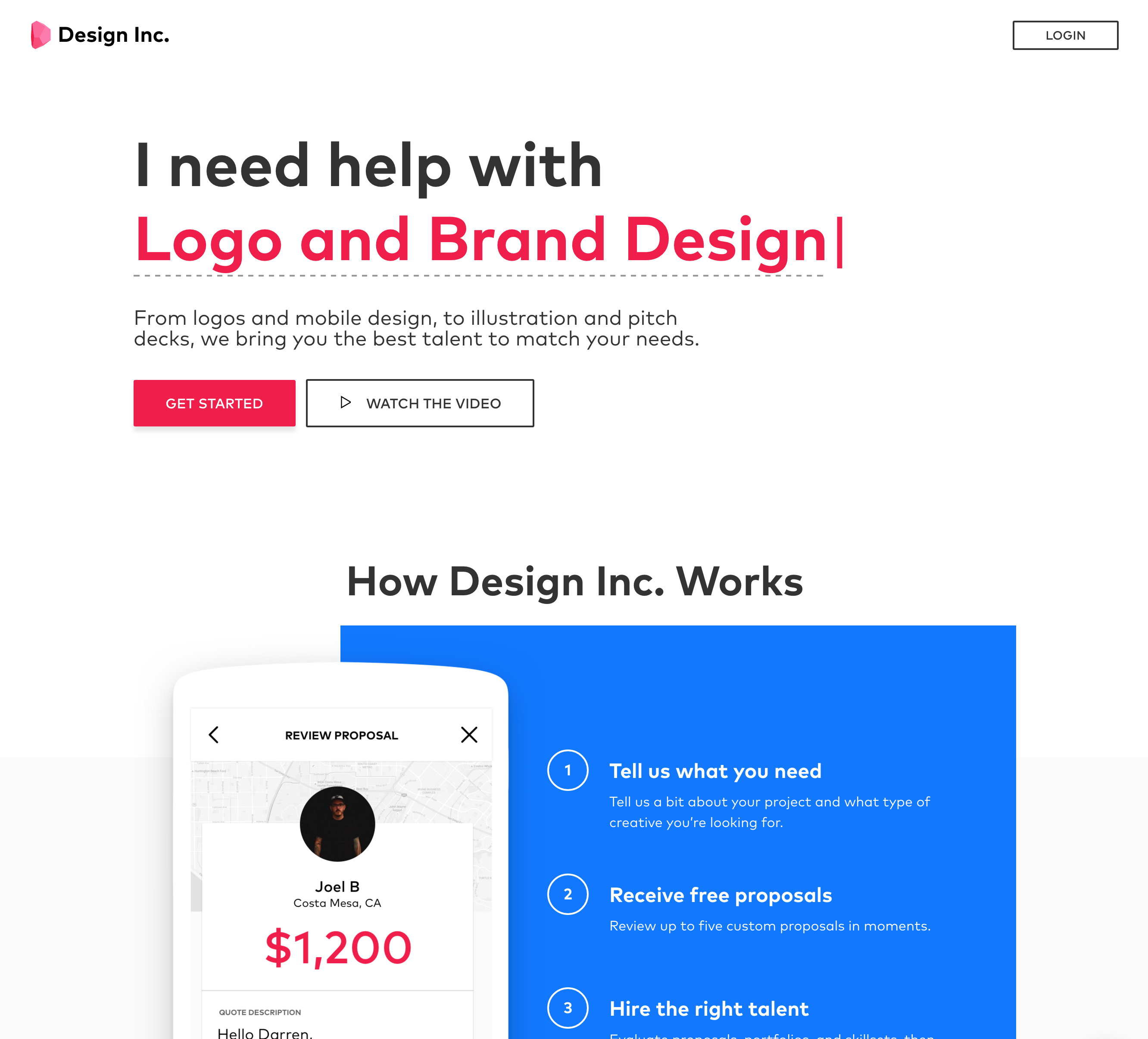 It might have surprised some when the original incarnation of the site was focused on “spec work,” in which designers provided samples of work to clients in an effort to win bids. Hemeon admits that he wasn’t a fan of this process: “I used to believe in never doing anything for free. Anyone that asked for free was a terrible human being….I’ve changed my perspective on that. What’s interesting, if you ask the question about what’s good design? I used to think good design was BMW, Apple, and beautiful architecture. So therefore, good design was this narrow thing. I don’t believe that anymore.”

“Good design is when two people can come together and solve a problem using, of course, graphics, or this language of design, to help solve a problem,” he explained. It’s this thinking that has also led Hemeon to shift Design, Inc. into its current form.

Designers not only have a profile on the service, they can also upload a portfolio of their work, which is similar to Dribble and Behance. There’s a hope of one day incorporating some of the tools Design, Inc. previously had around messaging and payments, but nothing solid has been planned. At some point, the company may make a play to become the Shopify for designers. And unlike typical marketplaces, Design, Inc. doesn’t feature any rating reviews because Hemeon thinks people are prone to either giving 1 or 5 stars, never anything in the middle. Also, he explained “because all designers are handpicked…they should be badass.”