Market researcher SuperData scaled back its virtual reality forecast for 2016, particularly after a disappointing launch of the PlayStation VR headsets. But it still believes that consumer VR software could grow from $407 million in revenue in 2016 to $14 billion by 2020. 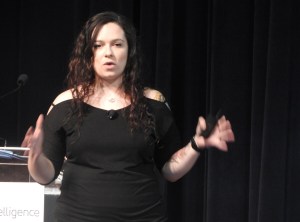 Above: Stephanie Lamas of SuperData at VRX.

Speaking today at the VRX conference in San Francisco, SuperData analyst Stephanie Llamas said that the company scaled back its forecast for PSVR because of scarcity of supply at the initial launch and the lack of marketing Sony put into the headset’s October debut. SuperData scaled back its forecast from 2.6 million PSVR units to 745,000 in 2016, after a disappointing Black Friday.

“[Game makers] won’t make a profit for now,” Llamas said. “To break even is already incredibly difficult. This is to prepare you for a couple of years and make sacrifices at the start. But there are so many great returns later on. You have to learn what is the value proposition. How much are you willing to put into it? There’s so much excitement around VR. But we need to be careful. We need to tread lightly. A lot of money is being invested. It’s still a ways off from mass consumption. But this is the time when you can become the key holders of the consumer. You have to experiment and do research and become the best VR stakeholder.”

During 2016, she estimated that Daydream VR would sell 261,000 in 2016. Oculus will hit 355,000; HTC Vive will be 420,000, and the Samsung Gear VR on mobile will be 2.3 million. She didn’t include numbers for Google Cardboard since so many of those units are simply given away for free and used for demo purposes only. Given that, the total number of estimated VR users in 2016 is about 16 million. 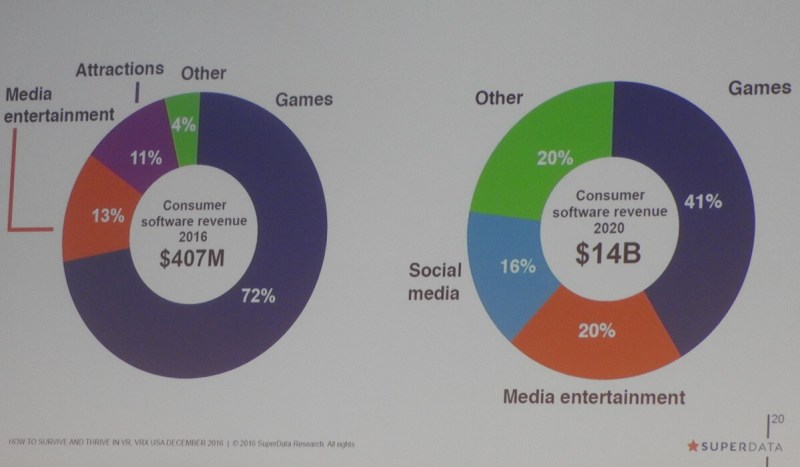 Llamas said there are a variety of barriers to initial adoption. One is the high cost of the systems for the PC and console. Another is the fact that a consumer has to proactively seek out VR in order to get a demo of it. You can’t see a VR demo so easily on TV or some other form of advertising, because the 360-degree viewing is a hands-on only experience.

“The consumer has to decide they want to experience VR,” Llamas said. “Until they put on a headset, they don’t understand what it is.”

Other barriers include the lack of knowledgeable assistants, a slow ramp for quality content, and unclear information on how much consumers are willing to pay for consumer experiences. VR arcades will be essential to getting more people familiar with VR experiences in the meantime, Llamas said. 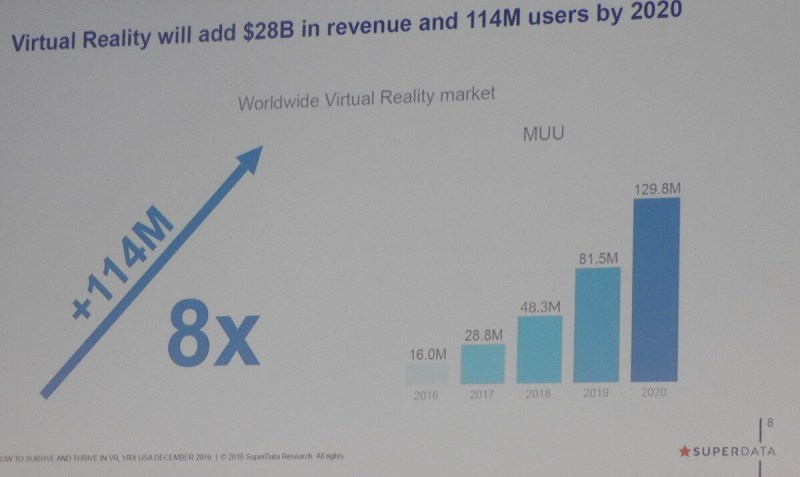 “We’re finding out slowly what consumers will pay, but it may be a long way off before freemium,” or advertising models catch on, Llamas said.

Of the VR software sales in 2016, Lamas said about 72 percent of the $407 million would be from games. By 2020, that percentage will fall to about 41 percent as enterprise, media, and other categories rise. With hardware revenue added, the forecast hits about $28 billion by 2020.

So the strategies for VR companies remain to be mindful of the opportunity as well as the delays in getting revenue.

In another talk at VRX, Intel’s Frank Soqui said that the world’s biggest chip maker remains excited about VR as the next stage of modern computing. He said that the company hopes to get its wireless, all-in-one VR headset, dubbed Project Alloy, into the market by 2018, helping to stoke demand for a lower-cost, more functional version of VR. Over time, he said, such advances will help create a more empathic connection between people as they use their computing devices.

In a funding panel, Joe Kraus, partner at GV (formerly called Google Ventures), acknowledged that the data for 2016 is “minimally exciting” in terms of stoking excitement for VR. He believes in VR in the long run, but he agrees there’s a “valley of despair” that is a necessary phase that is happening now. But the difference he sees with this platform is that the platform owners (like Facebook and Google) are investing heavily in the VR startup ecosystem still, and so are Chinese companies. That could help many of the companies that might die in the valley of despair survive longer until better sales data comes along, he said.