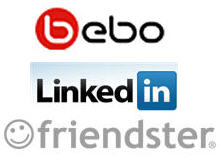 Friendster and Bebo are joining LinkedIn as the latest large social networks to throw open their web sites to outside developers.

Like Facebook, and a recent effort led by Google to do something similar with its “OpenSocial” project, these sites are letting third parties build applications for their pages. By recruiting other developers, the social networks are hoping to stimulate a barrage of activity — letting developers access data about users to create helpful services.

This, in turn, is expected to bring new advertising and subscription opportunities back to the networks.

Facebook, and now LinkedIn, Friendster and Bebo have each created a richer set of application programming interfaces (APIs) than offered by OpenSocial. OpenSocial, announced last month, is by many accounts a work in progress.

The value of any of these social networking platforms are open to question. Results have also been mixed for Facebook’s platform,.

Of course, applications designed to entertain, such as iLike’s music fan applications or RockYou’s Superwall, have managed to get millions of Facebook users, with hundreds of thousands using the application each day. Those companies are figuring out how to make money, and claim some success, although they haven’t revealed revenue numbers.

Business-focused application have not been a hit with Facebook users, as far as we know — not even something simple, like a group to-do list. But maybe work-related applications aren’t a good fit with Facebook, which has its roots as a social diversion for college students.

On Monday, business social network LinkedIn began testing that idea. It announced a platform (our coverage) built around its set of data about your business relationships, that other business-focused companies may want to access. Business Week, for example, has already built an application that shows you how you’re connected to people and companies in the publication’s stories. Data-sharing has long been part of LinkedIn’s strategy. Note: You can already pay to put your LinkedIn data in your Plaxo or Salesforce account.

On Tuesday, Friendster introduced more features for its developer platform, which launched late October (our coverage), including a directory of more than 180 third-party applications. Friendster’s platform is also a work in progress. For example, it apparently doesn’t enable voice connections on third party applications, although VoIP companies have had widgets on the site for years.

Today, Bebo will launch its own developer platform, as was mentioned in a couple blogs yesterday. From what our sources tell us, it will be very similar to Facebook’s platform, with a markup language and structure so Facebook developers can easily port their applications to its site. It is designed to integrate with OpenSocial as the latter’s development catches up.

Bebo has developed its own focus: distribution deals with large media companies, and entertainment features aimed at teenagers.

Separately, Bebo has already launched its “Open Media” platform (our coverage), a set of pre-built applications designed to give large media companies an inside track for distributing their copyrighted audio and video wares.

Where does this leave OpenSocial and its long list of partners? Google has put some serious brains on improving it, including Graham Spencer, the chief technology officer of JotSpot before Google bought it. JotSpot itself was designed to be an “application wiki” that allowed users to both select pre-existing JotSpot applications, such as a simple calendar or task-tracker, or build their own on top of it.

There are opportunities for many different types of companies to take advantage of the newly-available relationships between people present in these social network. How much those opportunities are worth is the next question.

Tomorrow, I’ll be moderating a panel on how to turn these apps into businesses, at an open house put on by Social Media in Palo Alto, California (more on its Facebook group, here ).
[With a hat tip to Nick O’Neill.]