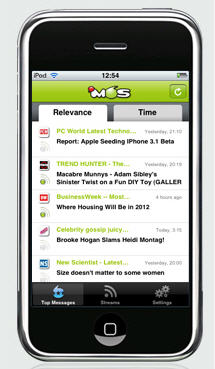 Developing apps for the iPhone can be a profitable business, but Apple’s review and approval process is still a black box. Apple’s intractable system can foil an app’s launch, as happened today for Israeli company my6sense.

My6sense has built an RSS feed reader for the iPhone that includes smarts that decide what the human operating the app would most like to read next. The app also monitors updates from Facebook, Twitter, FriendFeed, LinkedIn and Flickr.

But for unknown reasons, Apple has been sitting on my6sense’s app for weeks. The company scheduled a launch for today, July 31, and briefed reporters on its product and corporate background. Those of us who agreed not to publish our stories before 9 am today (an “embargo” in PR jargon) were offered interviews with my6sense CEO Barak Hachamov. The company scheduled a party at the posh Four Seasons hotel in Palo Alto, Calif.

This morning, though, my6sense’s PR contact emailed to let me know that Apple still hadn’t approved the app in time for launch day. Many publications, including CNET, chose to run their stories anyway, with a conspicuous change to describe my6sense’s product as coming soon, rather than downloadable right now.

The unreliable lead time on approval is a huge risk for developers. With the App Store perhaps already over 70,000 apps, most of them fighting for attention with others, a few days of waiting around for an app to be approved could cost an app developer the buzz they need to make real money from their apps. But planning press and marketing ahead of time risks having, as my6sense did today, a launch day without a launched product.

App developers are discovering what tech reporters have known for years: Relying on Apple for your livelihood is a risky business.