At its Build 2017 developer conference today, Microsoft announced that all developers can now publish Microsoft Teams apps to the Office Store. Previously, only select developers could build for the chat-based service. The company also updated its Microsoft Teams Developer Preview with additional features that will roll out to all users “across the next month.”

Microsoft Teams launched worldwide in March as part of Office 365. But the company has already started showing off new incoming features this month: Last week it was classroom collaboration tools, this week it’s features for developers.

First up in the preview, apps in Microsoft Teams will soon be more discoverable for end users through a new app experience. The goal is to surface apps so users can find and add them more easily. 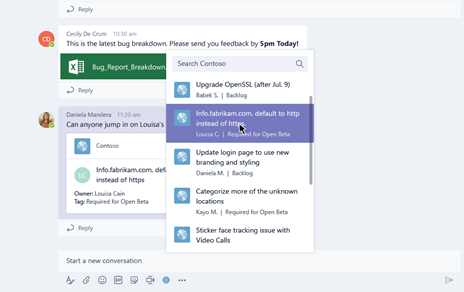 Next, compose extensions will allow users to issue commands. The goal is to bring information from an app or service directly into a Microsoft Teams chat without switching between windows or using copy-and-paste. Similar to the way they would add an emoji or GIF, users can include relevant data from a third-party service with a few mouse clicks so that everyone has the context needed for a discussion. 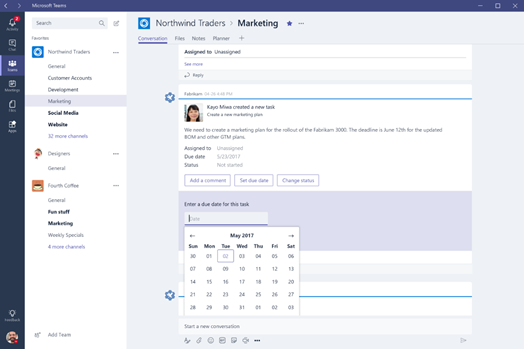 Also, third-party notifications are coming to the activity feed. This will let developers alert users of key information and updates from their service next to native notifications, such as @mentions, likes, and replies. Actionable Messages in Connectors will let users act on those notifications within the chat thread, such as by updating status, changing a date, or adding comments. In other words, make sure you don’t install too many apps or your feed and desktop/mobile notifications will quickly get cluttered.

Last but not least, the Microsoft Graph is getting new Microsoft Teams APIs in preview that allow developers to access team and channel information. Developers will be able to package these capabilities (tabs, bots, connectors, compose extensions, and activity feed notifications) into a single Teams app.