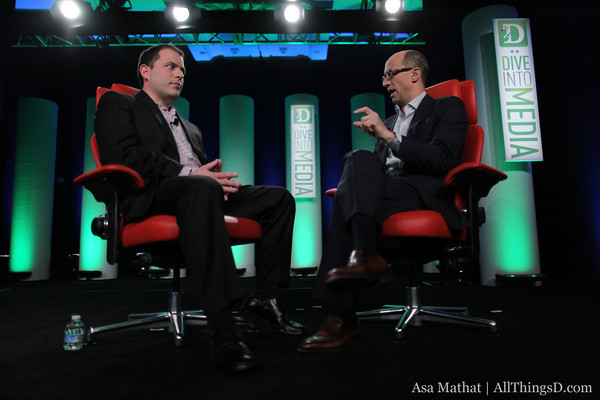 If Twitter is to become a dominant web company and live up to the accidental potential its original founders never intended, it will do so under the leadership of its well-spoken, quick-witted and confident CEO Dick Costolo.

Costolo, CEO of a company that has historically been as flighty as it name suggests, appeared every bit the able-minded and focused leader Twitter needs to succeed in a social landscape dominated by Facebook and under siege by Google.

Costolo, speaking at the D: Dive Into Media conference, was an unwavering force to be reckoned with Monday night, responding to queries with candor, strength of position, and the occasional joke.

Costolo was firm in his remarks to interviewer Peter Kafka on the subject matter of Google and the hotly debated Search Plus Your World update. Costolo, a former Googler himself, made it clear that the modified Google search experience, which now favors profiles and content from Google’s social network over Twitter content, is not in the best interest of the searcher.

Google should return the search results that people are looking for, he said unequivocally, adding that the search giant has crawled 300 billion Twitter pages to date, and has all the data it needs to include Twitter content in social search results.

But should Google stick to its guns, Twitter would remain unaffected, Costolo argued. Twitter is growing faster than it has ever grown before (it has 100 million active users), irrespective of what Google and Facebook are doing, he said. And in Costolo’s mind, all three social competitors can not only co-exist but succeed on their own merits.

As for whether Twitter is, as has been recently accused, bending to the whims of governments around the world and censoring its content, Costolo said the company is doing no such thing. The CEO stressed that, as VentureBeat originally reported, the company is focused on making sure tweets remain as accessible as possible. If issued an applicable, legal order to remove content, Twitter has the capability to withhold that content from just the users in a particular country and will publish these behaviors to Chilling Effects, Costolo explained.

“There’s been no change in our stance in respect to content on Twitter,” he said. “We want to be able to leave the content up for as many people as possible … this is the most honest, transparent, and forward-looking way for a company to deal with [takedown requests].”

And Twitter, he explained, has no intention to enter or appease China, a country infamous for its censorship of web content. “We’re already 100 percent blocked in China,” Costolo said. “We can’t go into China … We would love for people in China to be able to use Twitter the way we want them to … but the current environment doesn’t enable us to do that.”

The head of the information network also explained away Twitter’s decision to opt-out of participating in a web-wide protest of SOPA and PIPA, two now defunct controversial pieces that were previously making their way through Congress. “When you’ve got an amplifier like Twitter … you don’t pull the batteries out of the microphone,” he said, pointing to the platform’s ability to disperse more than 3.9 million SOPA and PIPA-related tweets that day.

“It is certainly the case that piracy is an issue for content creators,” he added. Twitter, he said, views SOPA and PIPA as flawed legislation created without input form both sides (Silicon Valley and Hollywood), and would have amounted to messy laws. But Twitter hopes for a middle ground, he said, and employs more than 45 people in its trust and safety department to handle piracy-related requests.

Perhaps most demonstrative of a new regime at Twitter was how Costolo managed to weave a question about chairman Jack Dorsey’s role at the company into a way to showcase his individual authority. Ever since Dorsey returned to work at Twitter in March of last year, the original creator has been glorified as the company’s true savior. But Costolo, who stressed that he and Dorsey have a a strong working relationship, made it known that he mans the ship, while Dorsey works to help guide its course. Dorsey, he said, has three primary responsibilities: to be a product visionary, to help with company branding, and to serve as an external Twitter spokesperson.

But if there’s one thing to take away from Monday night’s talk it’s this: Don’t mess with Dick. The CEO demonstrated that he, as PandoDaily put it, has “serious cojones.”