Uber stepped into a front-page-headline public relations disaster this week, after one of its executives hinted at deploying opposition research to destroy the reputations of critical journalists. The scandal sparked an online protest to boycott Uber and switch to its mustachioed competitor, Lyft. VentureBeat’s editor-in-chief, Dylan Tweney, chimed in, Mashable ran an entire op-ed on boycotting the ride-sharing company, and New York Times columnist Justin Wolfers tweeted:

So, in the ensuing days after the protest, did it actually hurt Uber? The short answer is no, not immediately, but it did hurt its app rating (a lot), which could be detrimental later on.

We looked at two sources, App Annie and AppData, two startups that estimate the popularity of apps.

Downloads for both Lyft and Uber follow a roller-coaster pattern, with more downloads toward the end of the month. For the past three days, both Lyft and Uber have steadily increased the number of downloads. The shape looks pretty much the same as last month.

Typically, with an effective protest, we expect to see some kind of major shock to the trend. It isn’t there. 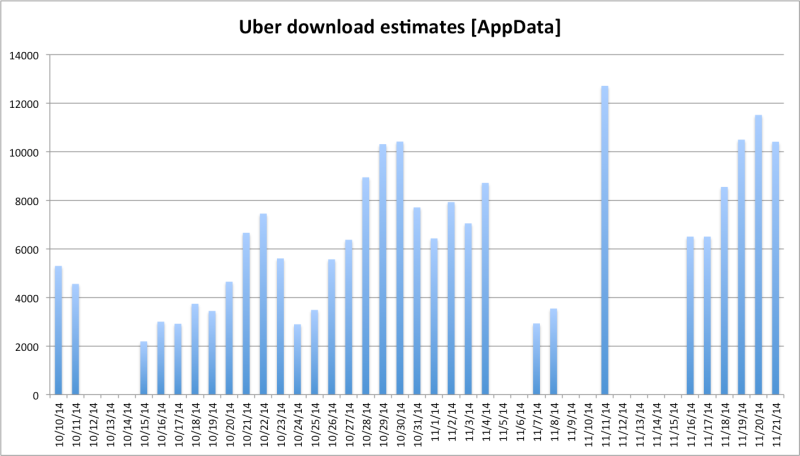 So, while Uber may be in trouble with the press and (potentially investors), riders don’t seem to care as much.

As one recent 5-star reviewer put it, “I’m not here to review the company or its actions, though I may not agree with some of their behaviors. This review is not to feed you more of the BS you will see in the reviews of this app. I’ve taken Uber multiple times for convenience and [speed], and every time the service has been great.”