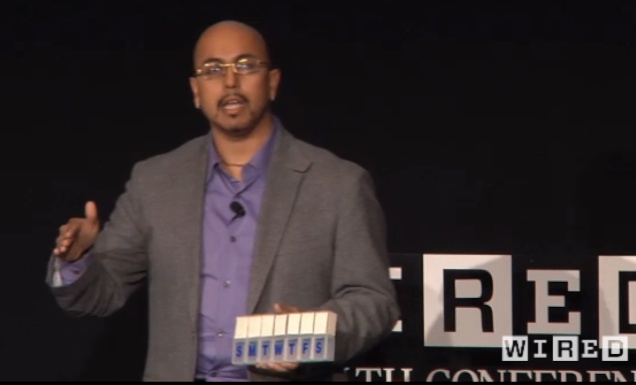 NEW YORK — Not every technological innovation has to look like it stepped out of the future — sometimes, it could be hiding right behind the mundane things around us.

That’s the tactic that DwellSense is taking to help senior citizens maintain their independence, while also gathering data about their habits. The project has developed sensors that can hide in pillboxes, phones, and coffee makers to make sure seniors are taking their pills properly, as well as to track any potential cognitive or physical health issues.

DwellSense began as a project at Carnegie Mellon by Human-Computer Interaction (HCI) student Matthew Lee, but has since received funding and support for the Robert Wood Johnson Foundation and a grant from Project HealthDesign. Today at Wired’s Health Conference in New York City, Carnegie Mellon HCI professor Anind Dey, who helped Lee develop the project, showed off what DwellSense has accomplished so far.

Having access to real-time and archived data about their daily activities could be revealing to seniors, Dey said, and it could also be useful for occupational therapists and clinicians. DwellSense has developed a tablet app to help seniors and their caretakers easily visualize their habits.

Dey brought on stage DwellSense’s pillbox, which looks no different from any typical pillbox (except that half the box is full of electronics). Hiding in plain sight is part of the project’s goal, as it wants to collect information without making seniors change their habits.

With the pillbox, DwellSense is aiming to understand and assess cognitive decline, Dey said. All of the other wired DwellSense devices serve similar functions: The phone lets you track missed phone calls and missdials, while the coffee maker can track if you’ve done all of the necessary steps in order. DwellSense’s sensors know things like when you’ve put the coffee carafe in, or if you’ve forgotten to add a coffee filter or water.

So far, DwellSense has tested its technology in 14 senior homes. While they were far from controlled laboratories, Dey said “we deliberately under-engineered the system so that we can get reliable data.” The company has to replace the devices every two weeks to deal with short battery lives.

While still fairly young, DwellSense shows us how health tracking technology can easily coexist with people — it’s so easy you don’t even have to think about the technology. Eventually, the likes of FitBit and Nike, both of which offer health tracking devices that you have to wear, could develop similarly transparent tech for general consumers.