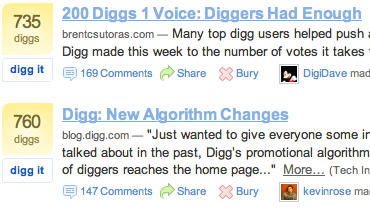 Digg, the social news site where anyone can submit and vote on their favorite online articles, has changed its method of deciding which articles are featured on the Digg homepage. Top users say their votes now count for less, and are on strike — refusing to submit stories until Monday, unless the company responds to their demands.

The reason for the change is that San Francisco-based Digg is for sale, with an asking price of more than $300 million. And it’s trying to broaden its content and its audience in order to attract purchasers.

Digg is a large, influential site with millions of users, or “Diggers” — tens of thousands visit articles on sites around the web through what they find on the Digg site, especially when stories get to the site’s homepage. Right now, most diggers are young men who are particularly interested in technology, especially Apple and Linux.

The site’s change is an attempt to ensure that “popular content dugg by a diverse, unique group of Diggers reaches the home page,” according to founder Kevin Rose, rather than by groups of top users.

A story submitted to Digg may now need more than 200 votes to make it to the site’s front page, regardless of who’s doing the voting. It used to be that the top Diggers, basically users who regularly submit stories that make the front page, had algorithmically-calculated extra-powerful votes that would send their submitted stories to the front page with far fewer votes.

One site, called RevoltNation, has been set up by top Diggers and is running a petition intended to get a large amount of Diggers to use other sites. The “change in the algorithm [for deciding what stories get to the front page] along with rumors of secret editors, auto-buries, etc., have led us to believe it is time to break ties with Digg.com,” the site’s manifesto says.

Many top Diggers, including “MrBabyMan,” “DigiDave” and others, have been holding a group videoconference and chat session to discuss how to respond, here.

Top Diggers see themselves as largely responsible for the site’s growth over the years. Some of these users have submitted and voted on thousands of articles, and spend many hours on the site per week.