The top Digg user of all time has a surprisingly calm demeanor as he brings up how he warned Digg many months ago about the backlash it’s facing.

“Keep in mind, I first voiced my concern about this to the Digg team back in March when I was invited to preview the (Digg) Alpha, so they absolutely knew it was an issue,” says Andy Sorcini, aka MrBabyMan (pictured above with Digg cofounder and chief executive Kevin Rose). “Maybe they wanted acceptance rather than constructive criticism.”

Criticism, constructive or not, is pretty much what the site has received from many users since last week, when Kevin Rose released version 4 of the site. Diggers accuse Rose and his team of favoring media companies and celebrities on the site’s “Top News” page. Rose has said his team is working feverishly to fix the “source diversity” issue.

“I think Digg expected some backlash for sure but not this much,” Sorcini said. “I think they honestly do want the site to suit both the needs of the publishers and the individual users, but when it comes to a dominant  direction for the site, ultimately money has to talk for the site to continue to exist.”

Sorcini lives in the Los Angeles area and edits TV shows. Digg has always been a bit of a spare time thing for him. In that spare time, he has brought almost 4,500 stories to the site’s front page. There are few people who knew version 3 better. Given the high volume of bugs on version 4, he wonders if the redesign was a rush job.

“I honestly don’t know what the motivation would be for debuting anything of that magnitude that had so many bugs on launch,” he said. “Maybe the pressure was on to ‘crap or get off the pot.'”

Because of the user backlash, many Diggers I talked to (I’m a frequent Digg user myself) say they think traffic to the site could collapse if changes don’t take place. MrBabyMan doesn’t believe that yet. “Because of their engagement with mainstream publishers, Digg may at this point be ‘too big to fail.’ But again, it wouldn’t have the same appeal that drew its core members, the members that popularized the site, to it,” Sorcini said. “Unfortunately, I feel that’s a loss Digg is willing to accept to fulfill their business model. Has traffic gone down? Is it due to the site being currently unstable? Perhaps. But, I feel at least a month of activity on the site needs to pass before Digg’s destiny can accurately be speculated on.” 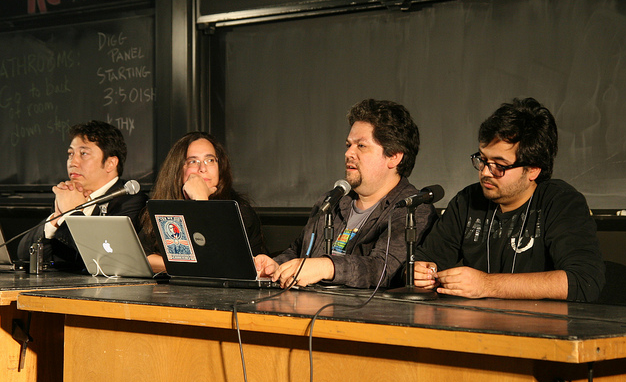 Sorcini said the Digg changes are similar to what happened to Napster years ago, and could be a good thing for Digg.

“It’s the equivalent of when Napster went legit,” he said. “The name was the same, but the service was completely different. Napster 1.0 was a place where users could connect and share content. Unfortunately for Napster, it was also completely unsanctioned by mainstream media. Later, Napster resurfaced as a legitimate pay service that leveraged the name to capitalize on its origins, but otherwise bore no resemblance to its former self. Now the fact that Napster turned out to be ultimately profitable makes this a cautionary tale with a potential happy ending for Rose, but the site will have ultimately lost its soul (like Napster).”

Last week, he wrote a screed to Rose online asking that he not forget about individual users as the site evolves. He thinks Digg may become a glorified version of popurls, a site that ironically updates what becomes “popular” on much larger sites, such as Digg. Oddly enough, there might be money to make from such an arrangement.

“Like a popurls you can vote on. Users can vote on selections from RSS feeds,” Sorcini says. “Popurls doesn’t work with publishers on anywhere near the scale that Digg does though.”

The latest word is that Digg will, at some point, bring back some of the more popular features of version 3, such as RSS feeds and an upcoming section that reveals what might hit the site’s “Top News” page. That’s great news, Sorcini says, but it doesn’t necessarily mean people will enjoy the site as they once did: “I’m hoping the upcoming changes will bring back some of the better aspects of v3 without sacrificing v4 publishing vision, but in everything I’ve read from Kevin, what’s conspicuously absent is any nod to bringing back individual content curation.”

It’s hard to know exactly what will happen with Digg and its users. Community uprisings of this sort look a lot more serious when they’ve just started. Rose has spent much time assuring his user base that adjustments will be made. Perhaps the changes will soon be enough to calm angry Diggers. Only time will tell.