Investments in game companies hit a record $5.7 billion in 2018, or more than twice the previous record set in 2017, according to advisory firm Digi-Capital. Game acquisitions also happened at a blistering pace.

Digi-Capital’s Games Report Q1 2019 reported that Epic Games’ $1.25 billion raise was the biggest round for a game company in 2018, and it was also the largest non-IPO games investment of all time. The only larger single amount raised by a games company was when Netmarble Games held its IPO in 2017. Even that record might not survive given Fortnite’s extraordinary performance.

As a sign of both financial muscle and the need to expand beyond core markets, Tencent was either a major shareholder in or investor in four of the top five deals last year. As Digi-Capital pointed out before, this is becoming a familiar pattern. Tencent was behind investments in Douyu ($630 million raised), Shanda Games ($474 million) and Huya ($462 million raised). France’s Voodoo raised $200 million from Goldman Sachs to round out the top five deals of 2018. 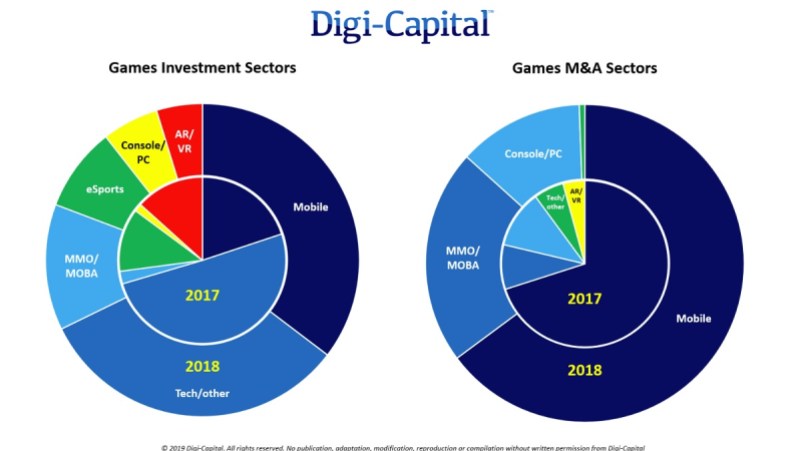 Above: The sectors for game investment and M&A in 2018.

The games acquisitions market was also on fire in 2018, with over $22 billion games mergers and acquisitions (M&A) making it the second highest year on record. Games M&A dollars are always dominated by mega-deals, which last year included Naspers selling 2 percent of Tencent for over $10 billion dollars for a 60,000 percent return, and Tencent and others acquiring Vivendi’s $2 billion plus stake in Ubisoft.

Zhejiang Century Huatong acquired Shenyue Network (the online games affiliate of Shanda Games) for $4.4 billion, PAI Partners picked up Asmodee Digital for $1.4 billion, and Aristocrat closed its Big Fish Games deal for nearly $1 billion. There were another eight acquisitions in the $100 million plus range, and more in the single millions to tens of millions range.

Unsurprisingly, mobile dominated acquisition activity last year as it did the year before. MMO/MOBA and console/PC made up most of the rest of the acquisitions market, Digi-Capital said. The games market as a whole is incredibly consolidated, with the top 10 public (i.e. stock market listed) games companies taking over three-quarters of public games company revenue and around four-fifths of public game company valuations worldwide (note: this is not all market revenue/valuation, as privately held companies are also significant).

Over the last decade, games IPOs have gone through three-year repeating cycles where one huge year is followed by two quiet ones. The last high came in the record year for games IPOs in 2017, with games IPOs in 2018 raising around 90 percent less than that high point (as Digi-Capital anticipated at the start of last year). While it’s too early to tell, if the three-year cycle repeats in the same way, then 2019 could also see muted games IPO activity, Digi-Capital said.

In such a highly consolidated, hit driven market, the level of games deal activity last year was extraordinary. Again it is too early to tell whether this year will continue in a similar vein, or if the cyclical nature of deal-making might see the market pull back. One thing’s for sure, it’s not going to be dull.