Investors poured $9.6 billion into game companies in past 18 months, but acquisitions and initial public offerings (IPOs) dropped to levels not seen since 2010, according to tech advisory firm Digi-Capital and its new Games Investment Report Q3 2019.

The report shows that after a record $5.8 billion games investment in 2018, venture capital and strategic games investors poured another $3.8 billion into games companies in the first half of 2019.

But there’s a cloud in the games ecosystem. Game company mergers and acquisitions (M&A) and IPOs dropped to 2010 levels at only $1.1 billion for the first half of the year. This dynamic might have created a significant financial overhang for games investors.

“The record level of games investment over the last 18 months is unprecedented,” said Tim Merel, managing director at Digi-Capital, in an email to GamesBeat. “The underlying games ecosystem is very healthy, with strong revenue and stable growth. Similarly, the level of investment into the games ecosystem has never been higher than in the last 18 months. Yet at the same time, the level of games company exits (M&As/IPOs) in the first half of 2019 has gone back to a low level not seen since 2010.”

He added, “So while a lot of money has been invested in games companies over the last 18 months, exits (M&As/IPOs) to deliver returns to games investors have slowed down dramatically in the first half of 2019. If this dynamic continues, the question is how long it might take for the record level of games investment to deliver a return to investors.” 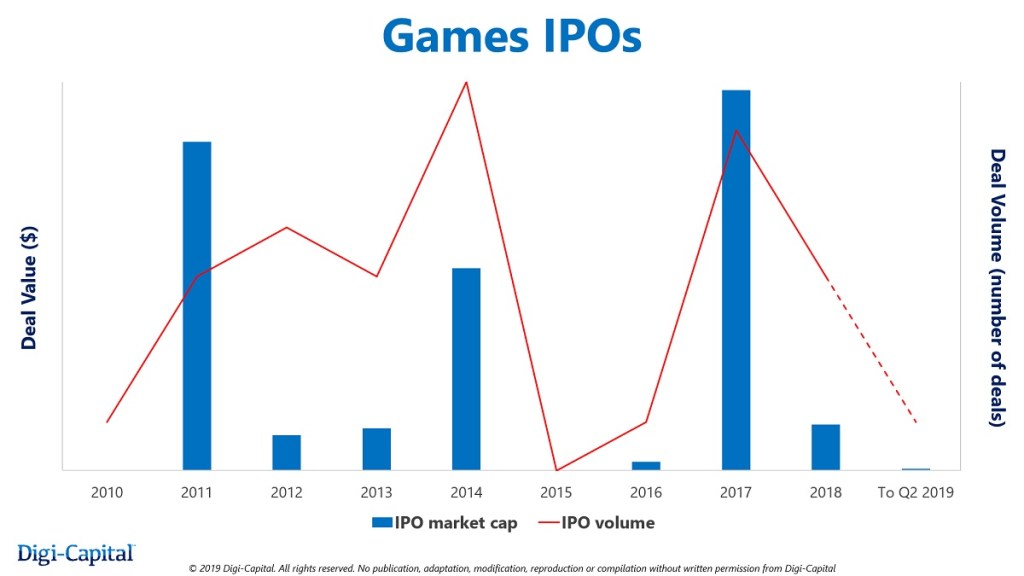 Yet games are inherently hit driven, as well as being consolidated around major franchises. The top 10 companies drive 75% of public company revenue and over 80% of public company market capitalization globally, Digi-Capital said. Lean indie games developers can do spectacularly well if they develop one or more hits (e.g. King $5.9 billion, Supercell $8.6 billion), but even they acknowledge that this is hard to predict, Digi-Capital said. 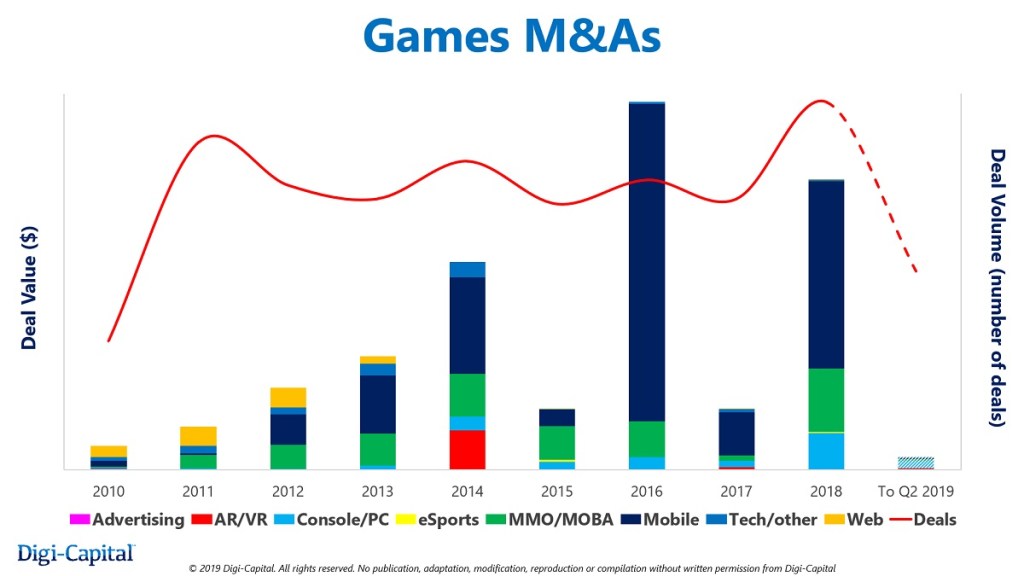 Above: Game mergers and acquisitions have slowed down.

Mobile games (at 66% of the deals) and PC games (particularly MMO/MOBA at 18% of the deals) drove the bulk of games M&A over the last five years. But in 2019, the acquisition levels fell to levels not seen since 2010. This decline has not been made up by other sectors.

The games IPO market has followed a recurring three-year pattern over the last decade, with one big year followed by two quiet ones. This pattern appears to be repeating, with a slow 2018 followed by an even quieter first half of 2019. Yet it looks like the delayed DouYu IPO could break the drought for games IPOs.

Combining games M&As and IPOs for total exits shows the market has been at or near record levels for the last three years, but dropped back towards 2010 levels in 2019. The largest pools of recently unrealized capital (i.e. last 18 months’ games investment compared to games M&A in the first half of 2019) are in esports at 292 times, games tech/other (games engines, games streaming etc.) at 31 times, mobile games at 29 times and MMO/MOBA games at 20 times.

While there could be significant exits for specific games companies in these and other sectors in coming years, a broader catalyst might be needed for all this money to deliver a return, Digi-Capital said. 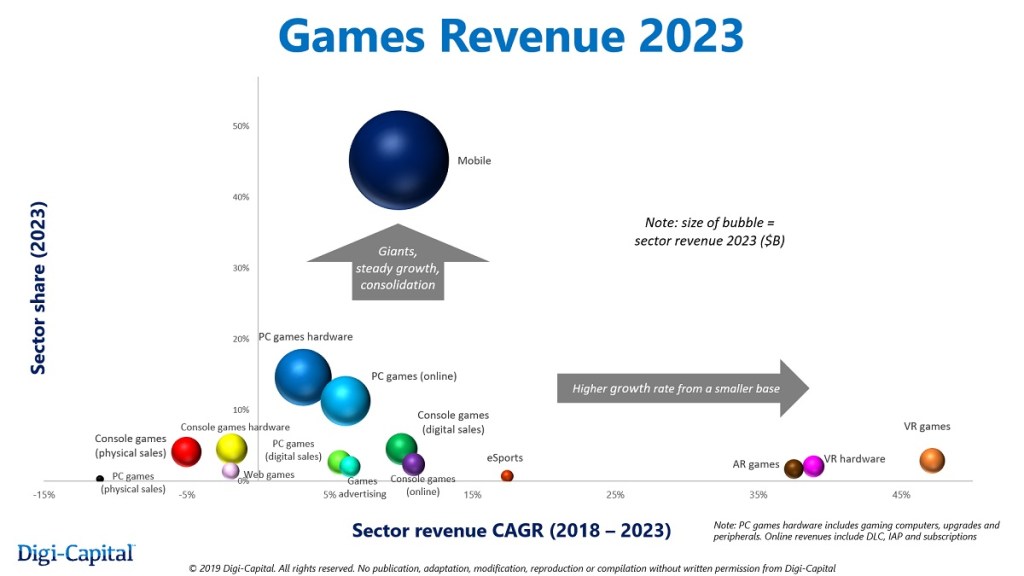 Above: Digi-Capital projects revenue for 2023 in the game business.

The games market is now largely consolidated, apart from a few, early-stage growth sectors like AR/VR and esports. (Such emerging categories are where investments have logically been concentrated). Merel said that the top categories for game investment, in order, are game technology, online games, mobile games, console/PC games, esports, AR/VR, games advertising, and web games.

Public games companies buying cash flow and growth drove record M&A over the last five years, but the lack of exit activity in the first half 2019 (as well as the recent cancellation of the Nexon sale process) might signal a slowdown. 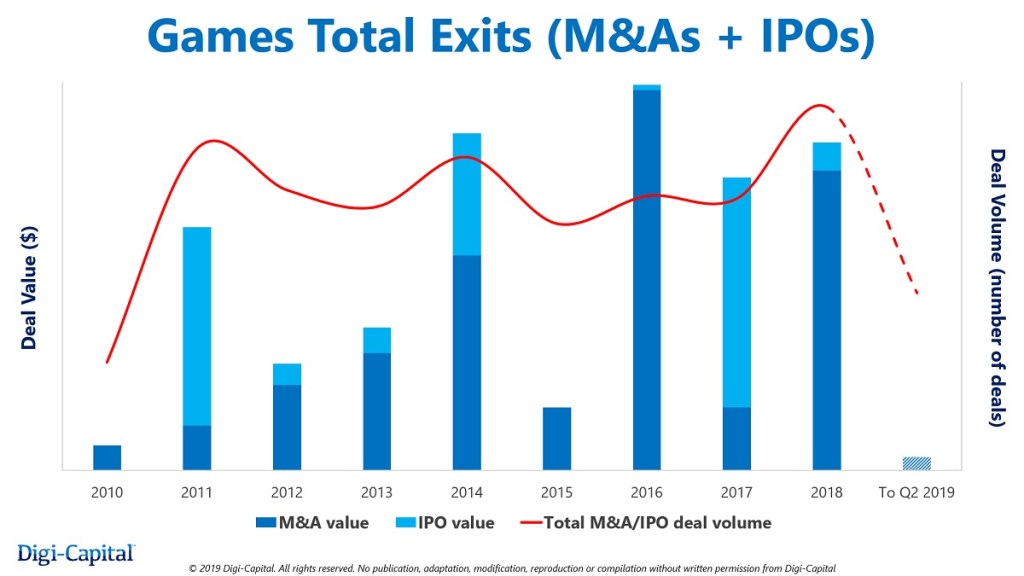 Above: Total exits in games, counting both acquisitions and IPOs.

Strategic games investors operate with long-term commercial returns in mind, but VCs are more geared towards a 10 times return on investment and shorter investment horizons. VCs have also been historically wary of games investment because of their hit-driven nature. So while games investors have become braver in the last 18 months, their enthusiasm could have unintentionally created a financial overhang in the context of the current games exit market.

As always, only time will tell, Digi-Capital said.