DigiExam, a startup that’s setting out to digitize academic exams, has raised $3.5 million to grow internationally and establish itself as the de facto provider of digital exams and assessments.

DigiExam is a cloud-based (naturally) platform that merges the offline/online world and promises cheat-proof closed-book exams, with a lockdown feature that prevents students from browsing the Internet. The platform can be used for any sort of exam or test, including open-book exams at home, which will cater well to the growing MOOC movement. Other facets of the platform include collaborative functions that enable teachers to plan, create, and grade exams in unison. 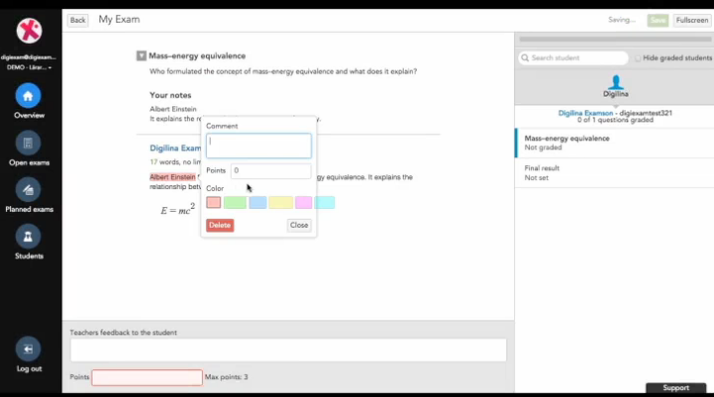 Founded out of Sweden in 2011, DigiExam says it currently serves more than 1,000 schools in 45 countries. It launched for the first time in the U.S. last summer with a specific focus on Ivy League institutions, including Columbia University, The Hewitt School, and Dwight School.

DigiExam had already claimed some notable backers, including business executive Sven Hagströmer, who is an investor and chairman of the board at emerging PayPal competitor Klarna, as well as Sophia Bendz and Oskar Serrander, who were pivotal in setting up Spotify in the U.S. The latest funding round was led by a “syndicate of tech entrepreneurs and investors from Europe and Asia,” according to a statement, and include Joen Bonnier, of the Bonnier family, owner of one of Sweden’s largest media companies.

“It’s not whether schools will move to digital assessments, it’s when they do it and how,” said Bonnier. “DigiExam has the potential to both transform school assessment practices and produce great return.”

DigiExam’s U.S. business is based out of New York, where cofounder and CEO Johan Hägglund relocated last year. He said he developed the idea after becoming frustrated (and performing poorly) during handwritten exams at business school. He created DigiExam alongside Nima Marefat while studying at the Stockholm School of Economics, which actually went on to become the company’s first customer.

“Secure, efficient, and reliable digital testing is better for teachers and students alike because it saves both time and money,” said Hägglund. “As schools and educators see the savings, and digitally native students continue to favor digital testing spaces, the growth potential for our products is exponential.”

The Stockholm-headquartered company made history in Sweden last April when parts of the country’s national secondary school tests were done digitally for the first time ever, with students taking their laptops into exam halls. But Sweden isn’t the only country to embrace tech as part of its school assessment setup, with fellow Nordic nation Denmark allowing pupils in 14 Danish schools to use the Internet during exams as part of a pilot project  that dates way back to 2009. (During a Danish language exam, the assignments were adapted to allow the use of online resources.)