While Amazon Web Services keeps adding features to its large and well-used cloud, other public cloud businesses are growing, too. DigitalOcean, a cloud vendor focused on winning business from developers, is pointing to some pretty strong growth by one measurement in recent months, even in comparison with Amazon.

According to Netcraft, a company that provides vendor-netural monthly data on Internet infrastructure, DigitalOcean has added more web-facing computers month over month than Amazon Web Services in Netcraft’s November and December surveys. The metric reflects the number of machines acting as web servers and handling traffic for websites. This hardly means DigitalOcean has overtaken Amazon as the top cloud provider, only that it’s growing fast as a cloud for sites to run from. 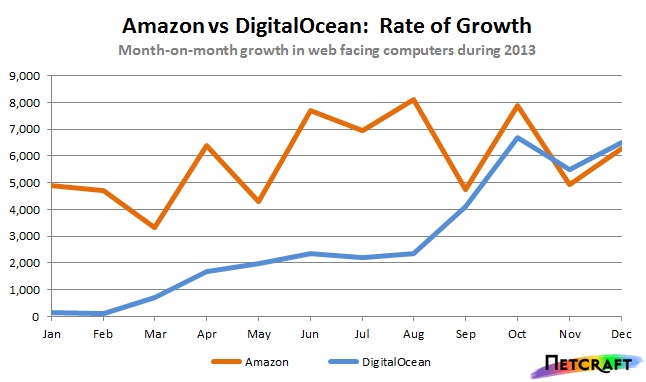 Netcraft alluded to the growth in a blog post earlier this month. Netcraft’s most recent survey found that 818 sites jumped from Amazon to DigitalOcean, while 88 sites moved in the other direction.

The company has grown fast. Netcraft’s December 2012 survey put it behind more than 1,500 others in terms of how many web-facing computers it had. Now it’s in 15th place.

All that growth has had an impact on DigitalOcean’s physical infrastructure.

“We were adding four (data center) racks a month in the beginning of the year. Now we’re adding them at a two-day clip,” Mitch Wainer, a cofounder of DigitalOcean and its chief marketing officer, said in an interview with VentureBeat. “It’s really been crazy, and our poor director of operations is losing his mind.”

The company now operates around 6,350 physical servers, up from about 5,000 at the beginning of October, Wainer said. It’s still a tiny fraction of the biggest cloud providers — presumably Amazon, Google, Rackspace, and Microsoft — but clearly, the number is going in the right direction.

To be fair, DigitalOcean’s raw number of web-facing computers — almost 35,000, according to Netcraft’s count — is still not on par with Amazon’s. A May Netcraft report pegged Amazon at 158,000. The site count also shows DigitalOcean lagging behind Amazon, with 490,000 websites compared with Amazon’s whopping 11.6 million.

And Amazon still has many more services available to its customers, from more physical locations, than DigitalOcean.

“The design agency actually tweeted out at us when her album dropped, when she released her 17 videos and 14 songs on our website,” Wainer said. “She had 15 million website visitors hit our website in one day … . So it was able to withstand that enormous volume in one day without going down.”

More large deployments could float to DigitalOcean in the next year. It plans to introduce many more features to enhance its cloud, including object storage, load balancing, and, later, a content-delivery network (CDN) while maintaining a simple and straightforward user experience, Wainer said.

The company is trying to promote itself among startups, too. It’s sponsoring Techstars in 2014, which means each TechStars company will get around $10,000 in DigitalOcean credits, Wainer said.

The company announced that it took on $3.2 million in venture funding in August and just opened a data center in Amsterdam. Plans call for the launch of a Singapore data center in January, Wainer said.