Discord joins the fight … for your money. The popular communication platform for gamers is revealing today that it is opening a game store and adding an instant library of games to its Nitro subscription program. This is part of Discord’s continued pattern of growth from a social tool to a fully independent platform where you can buy (or subscribe to) games, maintain a library, and connect with friends for online multiplayer sessions.

“For many people like us, you grew up during a time when there were a relatively small amount of games being released,” reads a Discord blog post. “Today, the problem has flipped on its head. There’s an abundance of fantastic games. Fantastic games that we missed. Games that we even purchased but never got around to playing. We want to give you an easy opportunity to play the golden games you’ve missed and we want to offer an awesome selection. So, we’ve curated some of these golden games and will be adding them to Discord Nitro.”

The store is opening up in soft launch today for 50,000 players in Canada, and Discord plans to expand to more players and regions over time. Those early testers will also see the beefed up Discord Nitro, which includes a curated list of games that automatically appears for download in the new Discord library tab. The service plans to curate the games that appear both in the subscription and the store, so don’t expect Steam like numbers of new games for now. And developers who sell their games in the store will get the same 70-30 split (30 percent going to Discord) that is standard on all other distribution platforms.

And, of course, you can add all of your games from any service to Discord’s library so you don’t have to open multiple frontends and stores. 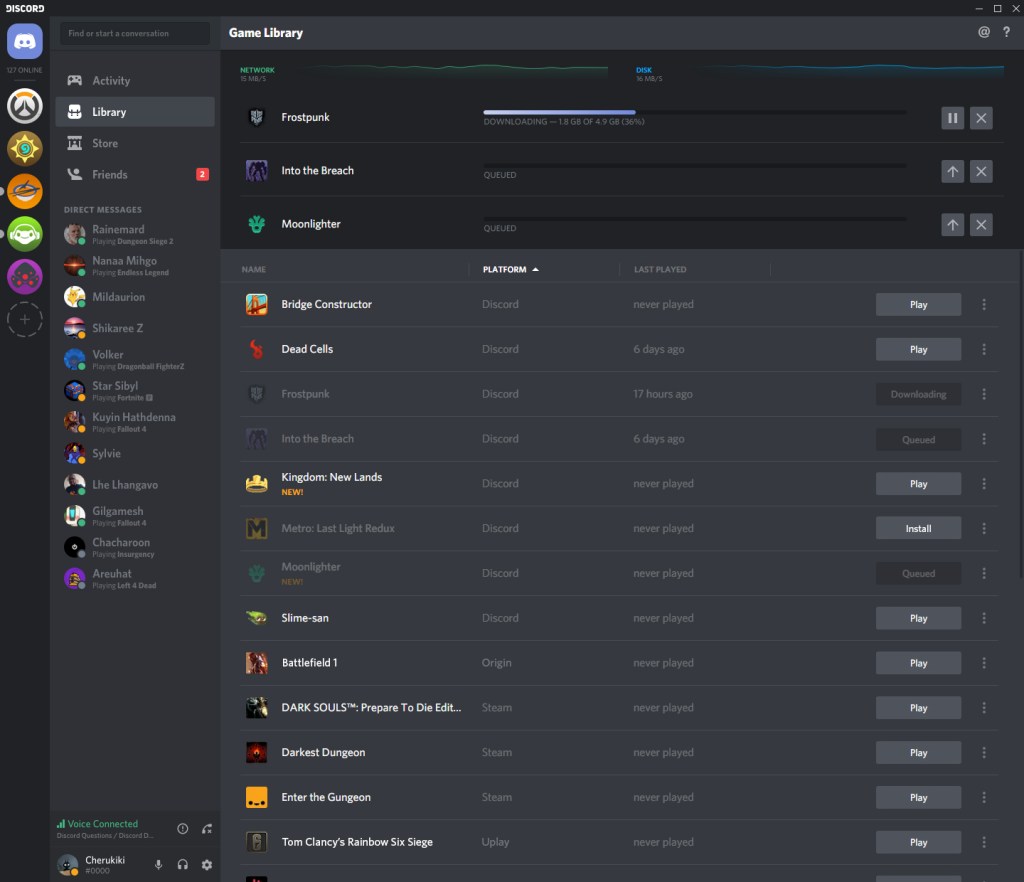 Above: The game library in Discord.

Here’s what’s in the Nitro subscription at launch:

And here’s what you can buy in the store:

Discord is also introducing the “First On Discord” program where it will help launch indie games that are only available on its store or through Nitro for a limited time.

“Supporting indie games pushes the boundary of creative game design and is important to innovation and the long term health of the industry,” reads the blog post. “To be very clear, First on Discord games are temporarily exclusive. They’re literally first on Discord — usually 90 days and then the developers can sell anywhere else they want. This beta won’t have any First on Discord titles, but we’ll be showing off some soon.”

So Discord is getting into the battle for your gaming dollars. Steam has dominated PC for so long, but it seems like something has broken loose recently. Major publishers are leaving Steam for their own platforms, and maybe Discord has enabled them to feel confident to do that because so many players no longer rely on Valve’s service for their social interactions. But now Discord is opening up shop as well, and it could potentially turn all of those users into customers in a way that disrupts gaming forever.