Data-focused blockchain startup Dispatch has raised a new round of funding from China’s Fenbushi Digital to build speedy decentralized applications with zero transaction costs. The company had raised $12 million previously, and it is now adding another $6 million to the round.

Dispatch is the creator of the Dispatch Protocol, which lets developers create data-intensive blockchain applications, or those that take advantage of the transparent and secure distributed ledger technology. The company argues that this technology allows it to execute data transactions without compromising user privacy.

Dispatch has created its Zero Knowledge Analytics and Delegated Asynchronous Proof of Stake (DAPoS) technology so businesses can build fast, secure blockchain solutions with zero transaction costs that are backwards compatible with the Ethereum cryptocurrency network.

Early blockchain technologies were slow in part because they used decentralized technology to verify blockchain data, and the costs of that technology grow more expensive over time.

“We found tremendous support for this idea from a wide range of investors,” said Patrik Wijkstrom, chief operating officer at Dispatch, in an interview with VentureBeat. “We’ve been building for 11 months now.”

He said applications built on the Dispatch Protocol are compliant with such laws as the health-oriented HIPAA in the U.S. and Europe’s General Data Protection Regulation. Dispatch has launched multiple versions of its testnet distributed ledger, mobile wallet, smart contracts, and software developer kit, and it will launch its mainnet 3.0 in the fourth quarter of 2018. The company’s CEO is Matt McGraw. 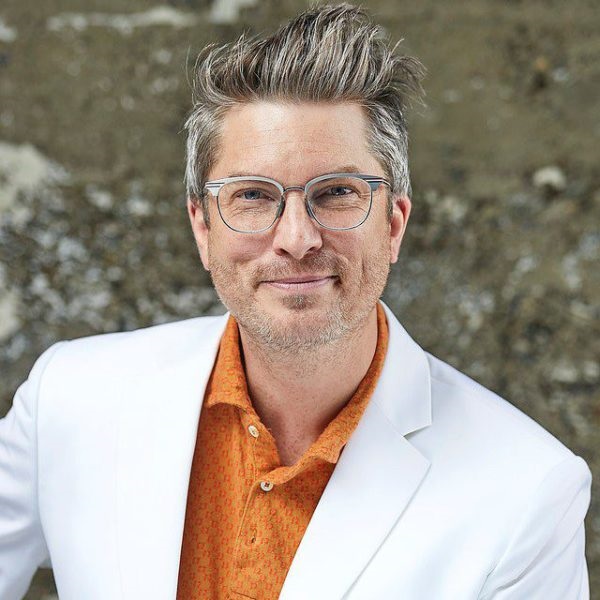 Dispatch has a number of proprietary, patented technologies. Dispatch Zero-Knowledge Analytics is its data management solution that stores encrypted data in its Dispatch Artifacts Networks (DAN), enabling companies of all sizes to comply with numerous regulations and responsibly store personal information.

Fenbushi Digital and its affiliated Fenbushi Capital fund have been ranked among the top five blockchain venture capital firms in the world by CB Insights, and the fund invests in blockchain-based protocols and solutions that can democratize global opportunities.

With its new investment, Dispatch will work closely with Fenbushi and its partners to engage and capitalize on key strategic opportunities throughout Asia. 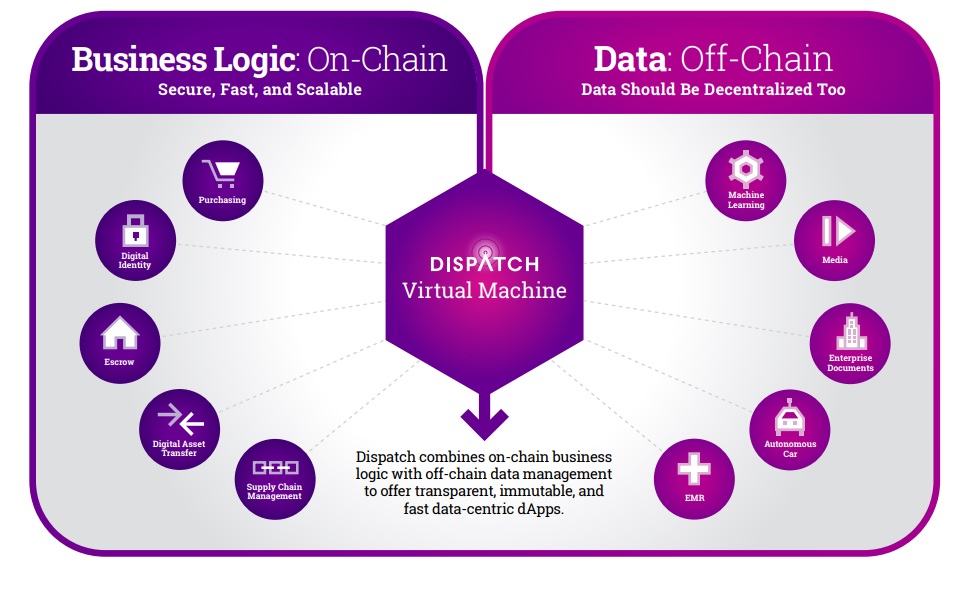 Above: The Dispatch ecosystem

“Dispatch is in an exceptional position to help entrepreneurs and enterprises in multiple industries as they create impactful, data-intensive blockchain applications,” said Bo Shen, founding partner at Fenbushi, in a statement. “The Dispatch team and their data-centric protocol allow us to work together to build a global community and cultivate ideas into real-world blockchain solutions.”

The company was founded in January 2018 with the goal of helping artists and developers keep more of the money they generate, rather than losing high percentages to transaction fees.

Blockchain can also remove much of the human interaction that leads to fraud, theft, errors, and manipulation of consumer data. Basically, transactions happen as one actor on the blockchain interacts directly with another actor on the network, and all transactions are validated using a consensus algorithm.

“We’ve killed the transaction fee,” Wijkstrom said. “We wanted to build a system that enabled applications developers to not have to worry about transaction fees. This can make us much more competitive against the credit card industry. We are leveraging blockchain to do this.”

Businesses have made a lot of money from tracking and using personal information. However, people have begun to realize that these “data brokers” are not always trustworthy partners — and have demanded new regulatory protections as a result.

Data is a commodity being created by billions of people who are now feeling uneasy about the businesses that ostensibly store data on their behalf. The public has become increasingly dismayed by headline-grabbing incidents in which their data has been compromised at companies like Equifax, Facebook, Amazon, Google, and Target, to name just a few. As multiple breaches reveal, these companies are having trouble defending their centralized data systems.

Dispatch is taking an entirely different approach. Wijkstrom said the company is enabling data management without relying on centralized silos. Instead, the company uses distributed ledger (blockchain) technology, coupled with analytics that preserve and improve a company’s ability to gain important insights that can help it conduct business without compromising consumer data integrity — using what Dispatch calls Zero Knowledge Analytics.

It basically eliminates a company’s need to store troves of data with critical information it “knows” about each customer before generating useful analytics. By removing that “knowledge” requirement, Dispatch creates a solution that both protects users and helps companies better understand their operations, thus reducing liability on both sides. 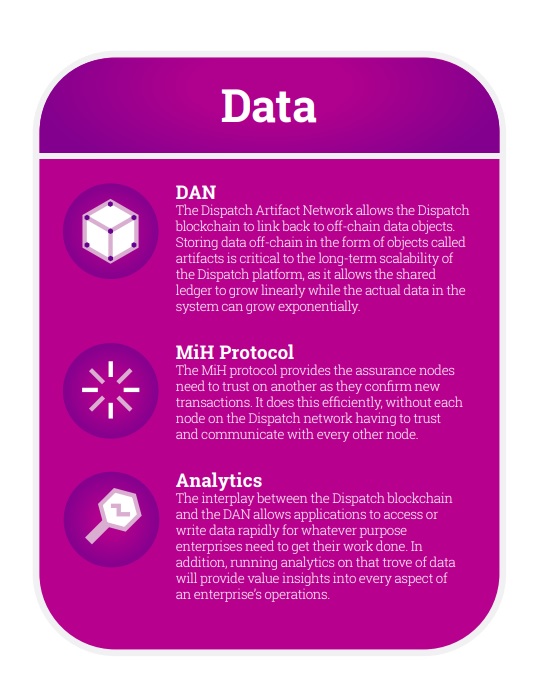 Above: Dispatch is working on multiple technologies.

A spate of new privacy-related policies, like Europe’s GDPR, are beginning to turn the tables on data brokers. Now, all the data these companies have in hand is becoming a liability rather than an asset.

Removing the intermediary by using blockchain ensures that transactions are transparent, immutable, and accurate, allowing relationships between two parties to be fast and credible. For businesses, decentralized ledgers offer the opportunity to interact with customers without being directly responsible for the data that is stored in a distributed network by the community.

At the same time, analytics for accessing user information on the blockchain can allow businesses to trustlessly query the data stored to gain helpful insights into their sales, supply chain, and other key operational domains without compromising personal information integrity. 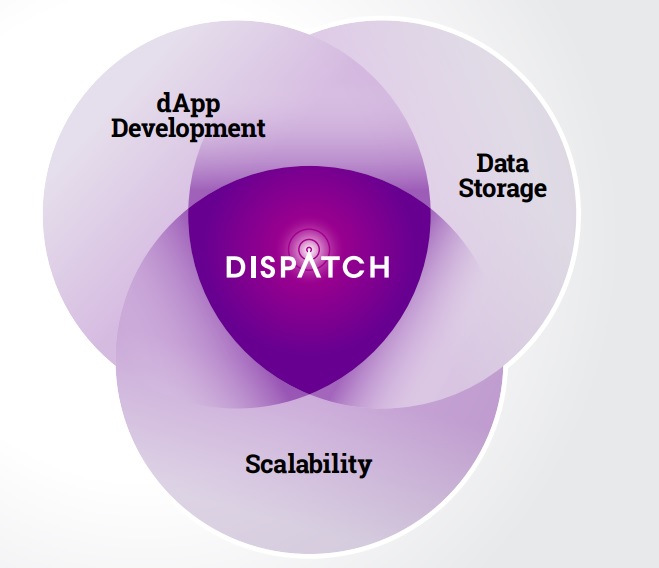 Above: Dispatch wants to deal with multiple problems.

Dispatch created Zero-Knowledge Analytics to layer on top of the key promises of the blockchain, combining the inherent strengths of decentralized ledgers with the responsible power of data to allow companies to access research and consumer information without compromising the integrity of the personal data itself. User information is encrypted and stored on the Dispatch Artifact Network (DAN), and Dispatch allows parties on the network to access the information without disclosing the personal data.

To do this, Zero-Knowledge Analytics uses a combination of homomorphic hidings and proxy re-encryption. Once a transaction or information is added to the distributed ledger, it is validated using the Delegated Asynchronous Proof of Stake consensus algorithm (DAPoS) and added to the DAN. When companies query the information, they are able to gain access to the encrypted data without compromising data sovereignty.

One use case for this is on social media platforms, which have the benefit of being free to users but costly in terms of lost privacy. With Dispatch, there would be a direct relationship with others in a community, and each person on the network would have control of their own data. Individuals would also have the option to be compensated for the use of their information, giving control of data sovereignty back to the creator or owner of the content and distributing or sharing the wealth throughout the community. 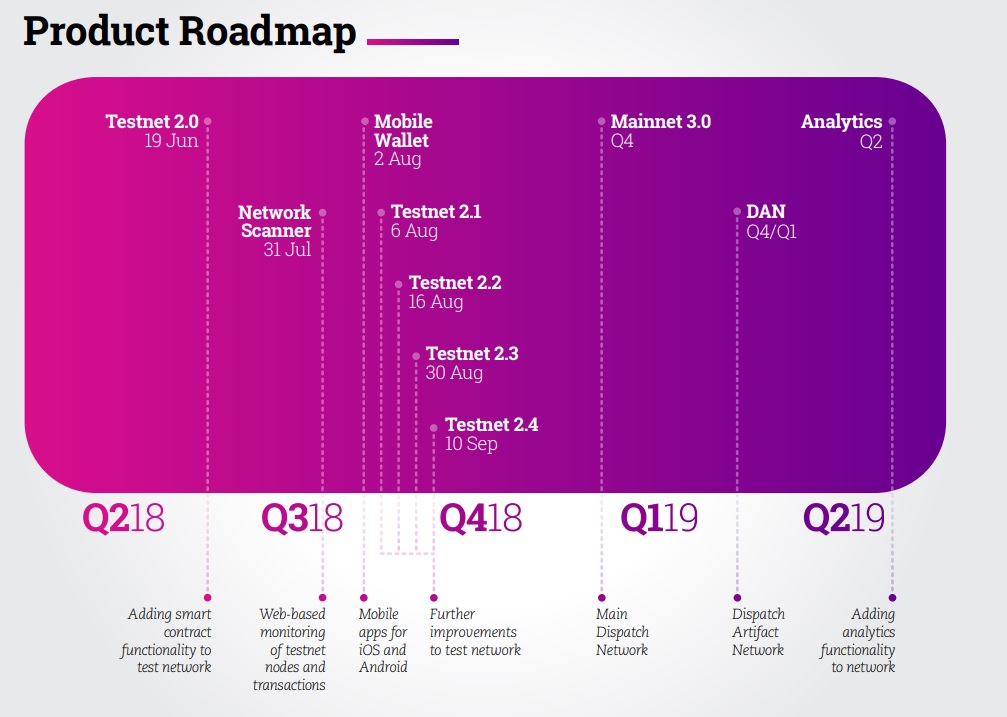 Meanwhile, medical research is one of the biggest industries in the world, but many of the companies, colleges, and researchers in the field can’t share their findings to help the overall community resolve health issues faster. Much of the research is hidden in silos and can’t be shared, due to the sensitivity of such personal information. This conundrum would be alleviated if researchers were able to share results without the liability of sharing details that personally identify individual patients.

With Zero-Knowledge analytics on the Dispatch protocol, developers of distributed applications (dApps) can be responsible citizens by using the data without disclosing personal information.

They can even build trustless communities by incentivizing or sharing profits with the community members. Think of ride-sharing apps or search engines that pay users to play on their networks, giving control over commerce back to the user.

Wijkstrom said 10 partners are testing the technology now, including one doing medical research.