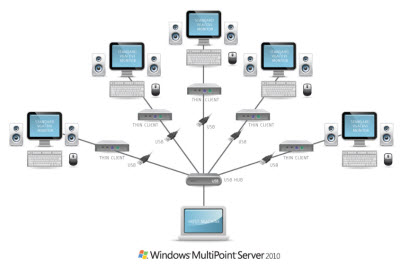 DisplayLink, a startup that came up with an innovative way for users to use multiple monitors with one computer, is announcing today it has hired a new chief executive and has raised $8 million  in funding from its existing investors.

The Palo Alto, Calif.-based company’s new CEO is Craig Ensley, a semiconductor industry veteran who previously served as president and chief operating officer of Peregrine Semiconductor. He’s running a company that makes it much more convenient to hook up a multi-monitor solution in your home or office.

It used to be a pain to hook up two or more monitors to a single computer. But with DisplayLink, it’s much easier. You simply plug one display into a DisplayLink adapter and then the other display into a computer. You connect the DisplayLink adapter into your computer’s universal serial bus (USB). I’ve been using it for a long time and it’s the secret to why I can write so many stories at once. I’m only slightly kidding. It is actually one of the best technologies that you can buy for your home office if you spend a lot of time working on a computer.

The DisplayLink gadget has a chip and software that configures the system automatically so that you can then use the two displays as a single work space. It expands the area where you can work and makes you more productive. DisplayLink calls this “true virtual graphics” and it can now connect up to six displays.

The Palo Alto, Calif.-based company competes with rivals such as Magic Control, Matrox, and makers of Display Port technology. Other solutions use more han one graphics chip in a computer, but DisplayLink eliminates the need to spend extra on hardware like that. DisplayLink has both wired and wireless USB virtual graphics.

DisplayLink was founded in 2003 as Newnham Research by Quentin Stafford-Fraser (a prolific inventor) and Martin King, a Seattle-based entrepreneur who previously founded Tegic Communications, which created the T9 predictive text messaging software found in hundreds of millions of mobile phones. The founders have since left. Ensley replaces former CEO Hamid Farzaneh.

Other backers include Atlas Venture, Balderton Capital (formerly Benchmark Capital Europe), DAG Ventures and DFJ Esprit Capital. The company declined to say how much money it has raised to date, but we wrote a story in September where we noted it raised $51 million to date.

The company has 60 employees. To date, DisplayLink has sold more than a million chips. Its customers include Toshiba, Lenovo, Kensington, Samsung, HP, Dell, Infocus, EVGA, Acer, Mitsubishi, Sony, and Targus. Most of those customers use the DisplayLink brand name in conjunction with their own adapters that use DisplayLink chips.