You’ve probably noticed that the comments on this site aren’t your typical WordPress-run blog default comments. Instead, they’re run by a third party startup called Disqus. We use this because not only does it offer nice avatars and threaded comments, but also because Disqus is expanding conversations beyond a simple stand-alone comment on one site into truer interaction throughout the web. A new version launching today is a continuation of that trend.

Disqus version 2 eliminates what was the biggest knock on the service: That it took the comments off of your blog and put them on its own site. This was problematic for some site owners because many rightfully wondered what would happen to those comments if their site ever stopped using Disqus. Since they were on Disqus’ servers, they could have been lost forever. More troublesome was that comments using the old Disqus plug-in weren’t able to be crawled by Google bots as they were JavaScript-based. Anyone who cares about search engine optimization (SEO) of their site would not like to hear that.

Disqus had an application programming interface (API) version that solved many of these issues, but its new developer API is much more robust. Comments are now entirely SEO-friendly and there is an automatic data sync between Disqus servers and your site’s local database. This is true for all comments both old and new that were made using Disqus.

But this effort to make the service more portable and open is just one part of the version 2 update. The main thing was to “make everything easier and faster to access,” Disqus co-founder and chief executive Daniel Ha (no relation to VentureBeat writer Anthony Ha) told me.

Along these lines, Disqus’ main site has also gotten a revamped look and feel. The navigation is cleaner and admin capabilities are more logical.

One of the goals of the redesign was to make the site “less like profiles and more like comment blogs,” Ha explained. That is to say, make author pages a more appealing place to go to in order to see what people you are interested in have been saying. After all, comments are content just as much as anything else on the web. 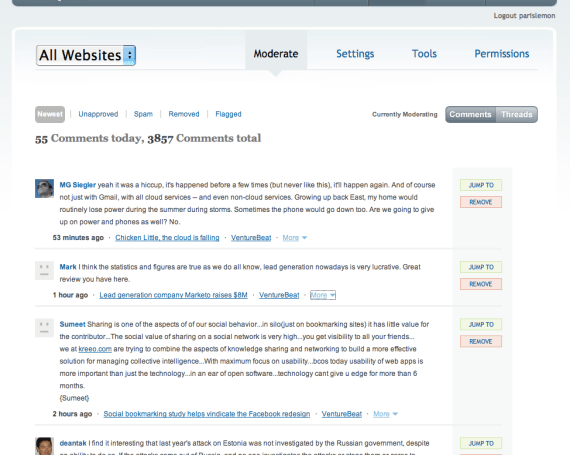 Links on both the site and in alert emails also will now link back to the blog or site itself rather than back to Disqus. Many site owners didn’t like that Disqus was seemingly driving traffic to its own site previously, but Ha told us it was an initial programming oversight and not any kind of traffic scheme.

The traffic argument didn’t make a lot of sense any way since the site has not advertisements and Ha tells us it will not be adding them. For monetization, he envisions a future version of Disqus where certain advanced features are paid for. He wouldn’t elaborate on what these feature might be, but made clear that everything you see now will remain free.

A killer feature would be if you would respond to a blog post on FriendFeed and have the comment show up not only there but also under the post itself. Other plugins somewhat support this, but in the interest of less conversation fragmentation, none have nailed it just yet.

The new site layout is live now and on the site you will be able to find the new WordPress plugin 2.0. Disqus also offers support for site run using Blogger, Tumblr, Movable Type and TypePad. It also does customized work for integration with technologies such as Drupal.

There are around 30,000 websites that have already signed up for Disqus, according to Ha. 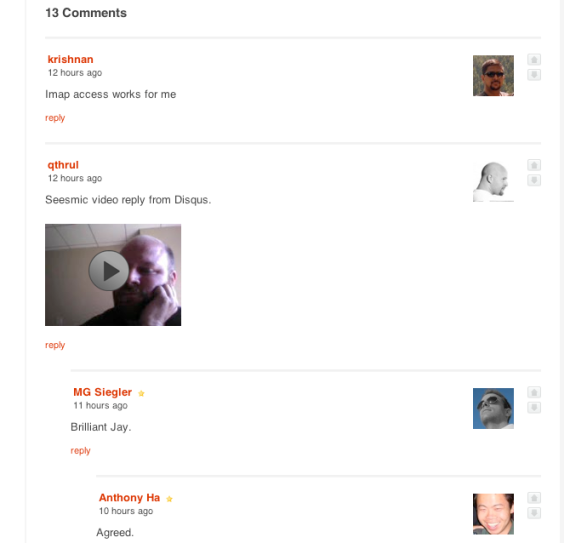