Distiller‘s ambitions to become the ultimate whiskey-drinker’s companion move a step closer with the news that it now lets you actually buy a bottle of the good stuff directly from within the Android and iOS app. 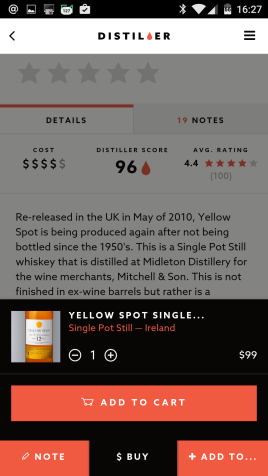 Founded in 2013, the Seattle-based startup began life as a whiskey recommendation engine, serving up personalized suggestions, scores, and expert reviews from around the world. It then morphed into a social network of sorts, letting you “follow” other whiskey aficionados and interact.

The next obvious step for Distiller was to become an e-commerce platform — an Amazon for whiskey, if you like. And that venture kicked off yesterday thanks to a partnership with Ezra’s, an online marketer of craft alcohol products.

Distiller is still limited in terms of what bottles you can procure through the app — around 200, we’re told — and these seem to be lesser-known malts from around the world, including from Ireland and Japan.

One minor complaint is that you can’t actually search Distiller by what’s “buyable” in the app. There is a “Let’s Buy Whiskey” button on the home screen, but that’s just a top 10 list of popular whiskeys. Other than that, it’s just luck whether the whiskey you’re searching for is available to buy — this is indicated via a “Buy” button at the bottom of the item’s description.

That said, the company states that around 80 percent of requested bottles are available to buy, and the team can help users track down harder-to-find whiskeys if they aren’t in stock.

It’s worth noting here that Distiller’s e-commerce function is only open to U.S. consumers — and only those who live in states that permit the delivery of spirits by mail.

So while Distiller isn’t quite the all-singing-all-dancing global whiskey emporium it could be, it’s still an interesting development in a potentially lucrative area — whiskey is the number one selling spirit in the U.S., having grown by more than 8 percent in 2014.

Moreover, the tie-up with Ezra’s is an example of how Distiller is striving to monetize, as it takes a commission for each purchase. But the company has also been making money through other channels and recently ran its first “promoted campaign” in conjunction with Maker’s 46 for Father’s Day, something it will be doing with other whiskey brands too.

The startup is quick to point out that such partnerships don’t impact the impartiality of the reviews — brands merely pay to have their beverage “featured” or promoted in search results.