This week, Neill Blomkamp, the Academy Award-nominated director of District 9, unveiled a short film that he made with the Unity Technologies game engine. At Unity’s event in Austin, Texas, Blomkamp’s Oats Studios showed off Adam: The Mirror, a 6-minute film that was a sequel to Adam, a short film that Unity built as an internally produced showcase demo last year.

Evoking the theme of transhumanism, or the notion that we can live beyond our physical bodies, the film shows an android coming to life and realizing that it was a human trapped in a robot’s body. The film was meant to show off the power of the Unity engine when it comes to making high-quality 3D graphics. But to Blomkamp, it’s also an example of how a game engine can help democratize film, making life easier for independent film makers just as Unity has done for indie game developers.

Oats Studios in Vancouver will release a second film, Adam: The Prophet, also built with Unity. And if all goes well, then Blomkamp might be able to get financing for a larger Adam movie, since he has already created a backstory and script for the project. Blomkamp said the game engine helps because it allows him to shoot one scene and then put it into a digital form, like a “3D sandbox.” He shot some scenes in the desert for Adam: The Mirror. And if he needs to re-use that desert scenery, he can do so very easily because it exists in a digital format. So he only has to go out to the desert once to shoot actors.

I sat down briefly with Blomkamp and talked to him about the transhuman theme for Adam: The Mirror, and its follow-up film, coming later this year, dubbed Adam: The Prophet. Blomkamp said he also made District 9, a 2009 science fiction film, based on a short film, and the validation that the short film received made the bigger film possible. 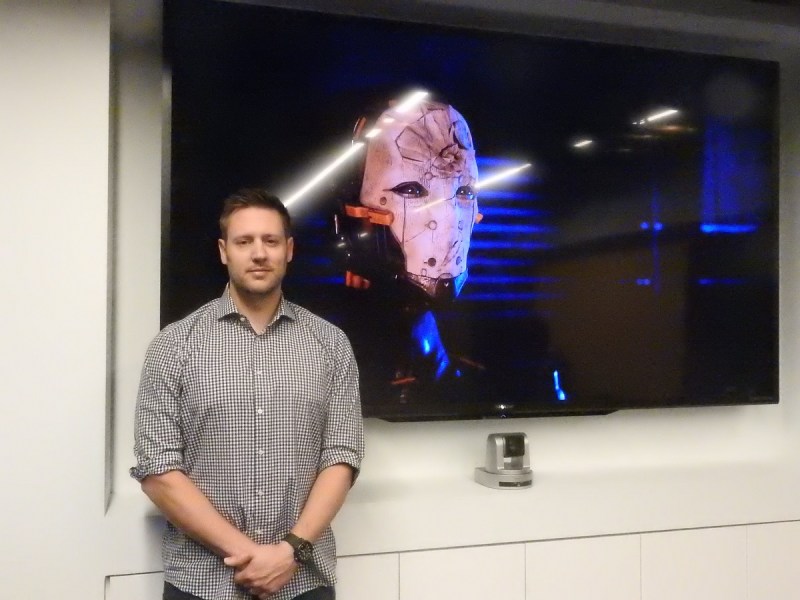 VentureBeat: How many people did you have working on the whole thing?

Neill Blomkamp: On this piece? I don’t know. That’s an interesting question. My guess would probably be 20 to 25.

VB: That includes some of the Rock Paper Scissors people?

Blomkamp: No, I’m just counting us. If you count production it’s a much bigger number. But the way I think of it is, production would be—you have your producers, and then you bring your actors out. You have your day of mocap. Facilitating the actors, you’re going to have a lot of one-day people that are going to disappear. But then all that work goes back to Oats and the core team is on it for five months. That group is around 20 to 25.

VB: The advantage of having all these desert scenes in VR—if you go back to it and create more scenes, it’s very conveniently available for you.

Blomkamp: Right. That’s one of the main reasons that’s interesting for us. Have you seen any of the Oats pieces? If you go to oatsstudios.com, the company and the kind of films it makes—you’ll see how real time rendering in this new 21st-century way of doing things is conducive to the company. The cost-effectiveness of revisiting those locations is one of the main things I’m going to try to exploit with the next year of the company.

Before, you were faced with hyper-expensive options of either all CG, like Adam, but to revisit it and go back to the desert, it’s going to take a lot more artists. The divisions within the company would be greater. Compositing is going to have to be brought in. The way you’re going to layer the fire behind them and stack everything in layers and blend it and try to make it photoreal–now that’s gone. The other option is to film it and then return to the filming location, which is also very expensive.

This allows us the analogy I always use with Cheers and the bar. You build it once and it’s there forever. We have our own mocap stage, so all we have to do is get the actors back in to the mocap stage, and all the work is already done for you. Now the second film is just performance. 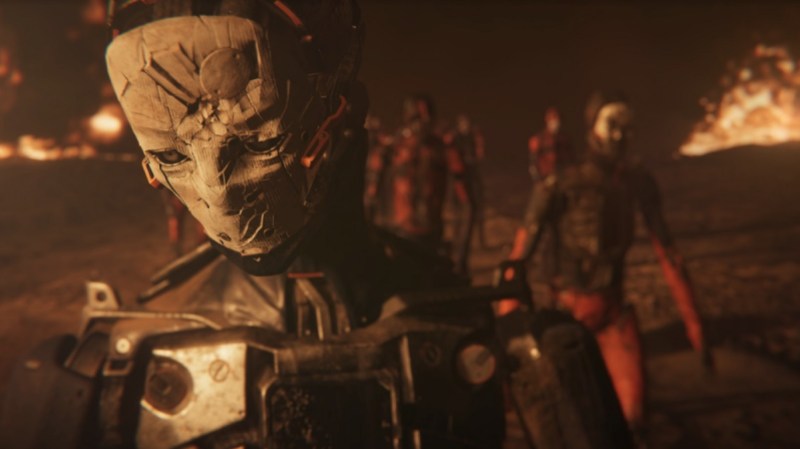 VB: Did you have a ballpark estimate of how much this cost?

VB: It sounds like, from the scripts, you know where this would go if you got financial support for it. But there are lots of other things you could change. It’s flexible.

Blomkamp: The Star Wars analogy is still a good analogy. Before we started making it, I spent a month – or two, or three, four, five – writing what we always refer to as the “bible.” If you went to the Wikipedia pages for Star Wars and picked 50 pages to paint a complete picture of it, that’s what I came up with.

The only reason the word “change” would be in there is if we made, say, 10 films like the one you saw, and the audience really responded to two. The change might be that you focused on areas that, at the time, you didn’t know were as important as they’d become, and more fidelity is given to that storyline. But I wouldn’t change what we wrote. The structure of the overarching the story is cool.

VB: Were there some things you felt that had to be in this six minutes in order to get a larger point across about the larger project?

Blomkamp: I’ll tell you what I was operating under. The first film existed, which I was just a fan of. I wrote a bible that took that film further. Then we knew we were going to make two pieces. The thought process was—the audience saw this person come out of a jail cell and figure out he was in a body that wasn’t his own. You want to have some more information about that character and travel with him. That was one angle. The other angle was, in the grander Star Wars-ian world, what elements were not introduced in the first piece? What are the other things we haven’t seen? The second film should be about things we haven’t seen.

That was the basic thought process. The more nuanced elements under that would be things like the mind-body disconnect, this duality that makes you human, transhumanism. In the other film, religious themes, the idea of cults and manipulation. 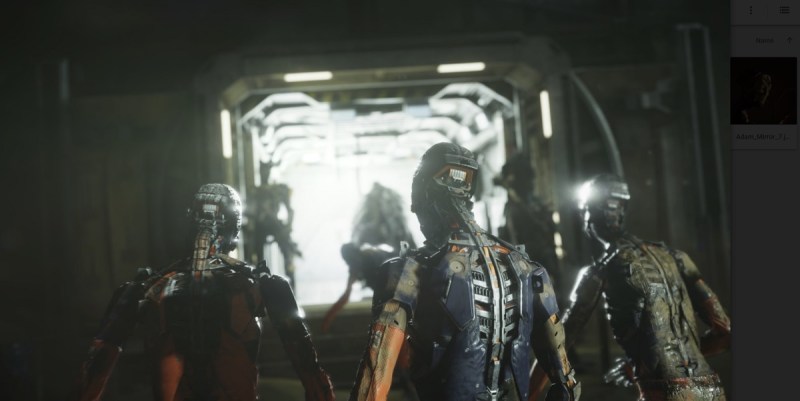 VB: I noticed the character’s eyes the most.

Blomkamp: That’s the only part that moves, yeah.

VB: They’re blinking. They looked very human. But they’re inside this robot body. That seems to say a lot about this transhumanism theme.

Blomkamp: There’s a few elements like that. If you take a brain—there’s a lot of thought experiments, like the one about a brain in a vat. If you think about what that means, there’s a disconnect between where the brain is existing and the physical body it exists inside of, right? How do you ground the brain?

One thing we talked about was like, does it breathe? You heard them breathing, even though it makes no sense. They shouldn’t be breathing, because they don’t have lungs. But there’s a psychological reason – maybe before they go insane – to give them their own thought process that they’re breathing. We did that on purpose. We did things like having two eyes that are wired to the brain and move like human eyes. That would be as much of a help for the audience as it would be for the character inside that body.

VB: I noticed the breathing. It made me think, is this character wearing a mask?

Blomkamp: It’s a piece of a human, yeah.