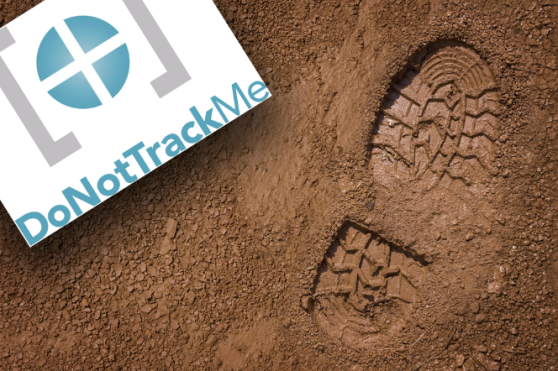 The anti-tracking web data initiative has caused a lot of controversy over the past few months, but not much has changed: Online advertisers are still tracking with little regard for privacy, and most web users are still completely oblivious to it.

“Right now, Do Not Track is like a condom with holes in it — it doesn’t work too well”  Sarah Downey, an analyst for online privacy company Abine — one of the good guys — told me.

Abine’s Do Not Track Plus browser extension has been one of the most successful, and popular, ways for web users to lock down their browsers down. Now, the extension is getting a makeover that includes a slew of more expansive and impressive upgrades. (Also, the extension is now officially known as DoNotTrackMe. It’s a branding thing.) 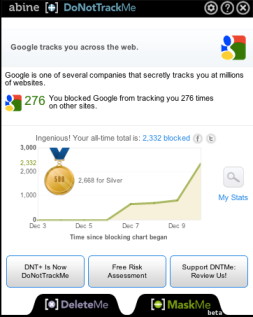 “The most noticeable update is how it looks,” Downey said. And she’s right. Abine has revamped the extension’s exterior, creating a more attractive experience to go with the extension’s new features. Not only does DoNotTrackMe broadcast the (admittedly ineffectual) Do Not Track header, but it backs it up with a variety of other blocking measures as well.

One of the biggest new additions is that the extension finally allows users to keep a record of just how many trackers they’ve blocked. “People are really shocked by the sheer number of trackers they encounter everyday,” Downey said.

I’ve been running the extension since late last week, and have already blocked trackers over two thousand times. And, yes, I am shocked. Wasn’t web data tracking supposed to get better?

Downey says the answer to that question is a big fat nope. “Advertisers have failed in their attempts self-regulation. We’ve seen it first hand,” she said.

Under some of the most basic self-regulation rules, online advertisers are obligated to offer web users an easy way to opt out of web tracking. But between confusing explanation and oftentimes ineffective opt out processes, they haven’t done the best job of that.

Hence the need for extensions like Don’tTrackMe, which is joined by Abine’s other security extensions, DeleteMe and MaskMe. Clearly, the company has found a void in whats out there now and is filling it in a major way.

But while giving web users their online privacy is tough enough alone, Abine also aims to do it in a way that’s simple and accessible. That’s why the extension allows users to tweak their settings based on their needs. Trust a particular site or tracker? DoNotTrackMe’s granular controls mean users don’t have to choose between securing their privacy and crippling their web browsers.

“Our biggest goal is to let people use the web without breaking it,” Downey said.