Amazon.com, Inc. (NASDAQ:AMZN) recently announced that it is raising the minimum purchase amount from $25 to $35 to qualify for free shipping. Though no reason was given, the consensus seems to be that it’s a way to push customers toward the Amazon Prime subscription in addition to the more obvious reasons being to get customers to spend more and to offset the incredible amount of shipping costs Amazon pays for.

But could this have to do with today’s 3Q earnings announcement in which the company posted another quarterly loss?

Last year, Amazon’s shipping losses amounted to nearly $3 billion or 5 percent of total sales, as Colin Sebastian, an analyst at RW Baird, has pointed out.

Its strategy is to crush the competition while gaining customer loyalty (albeit this is an oversimplified look at it). For example, to challenge the tablet market, the Kindle Fire sells at a loss of about $2 per unit. But while their hardware is sold at cost, they gain approximately $136 per unit from media bought for the device.

In other words, the company may be losing (a lot of) money, but they’re generating huge sales volumes and growing market share. Revenue is increasing; profit can come later. Short-term gains are sacrificed for long-term goals — and it seems to be working so far. Amazon’s growth is outpacing overall ecommerce and retail growth which means it’s succeeding at stealing market share from competitors.

Of course there are also ways to hedge some of the losses from their core retail business through higher margin avenues like their Amazon Web Services – their cash cow.

Amazon has razor-thin margins and actually, according to Yahoo Finance, Amazon’s profit margin is actually negative (-0.15%) at the moment. A bottom dollar strategy like this doesn’t always work (in fact, rarely), but for a company like Amazon that has built up sufficient resources and the reputation to support such a strategy, it can. For now.

Part of the strategy may be to build up Amazon’s brand to the point where the trust factor will eventually build in a “premium” factor — consumers will be willing to pay a premium price to get a certain item from them versus other vendors. One of Amazon’s acquisitions, Zappos.com, is a great example of this. Zappos’ didn’t have the lowest prices but consumers were willing to pay a premium for their stellar customer service (return policy, free shipping and returns, etc.). Amazon wasn’t able to emulate the same experience and instead chose to acquire the company in 2009.

Could a similar model be where Amazon is headed in the future?

Investors Have Drunk the Kool-Aid

The amazing thing is that even Wall Street has bought into their strategy.

What other company can post consecutive losses without a huge blow (and sometimes even gains!) on their stock? After Q2 financials were announced, with Amazon posting a loss of $7 million despite an increase in revenue, the stock dropped by less than 2 percent.

Even with another projected loss for Q3, the stock was trading at an all time high just the other day — and it gained eight percent today after the earnings announcement! Amazon currently has a -0.23 EPS (Yahoo Finance), yet it is trading at over $300 per share.

A normal P/E value is around 10:1 — what’s going on? A high P/E ratio means that investors are expecting Amazon’s profit to increase. This would require Amazon to increase revenue or profit margin. Despite investor confidence, it can still be seen as a bit of a scary stock although the brand power and customer loyalty helps to hedge some of the risk. 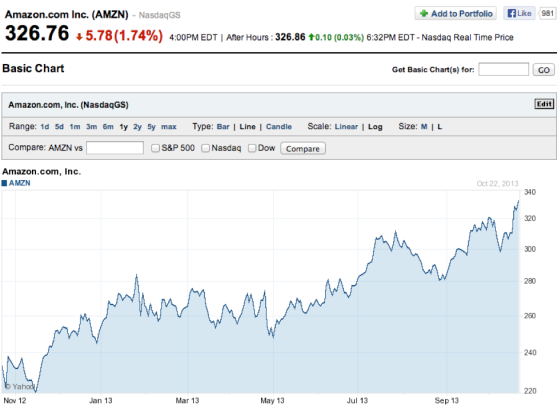 CEO Jeff Bezos has a long-term strategy but he does know that there needs to be some periodic proof that the model is working and will eventually be profitable. The question is, how long investors are willing to wait.

How sustainable is the business model and will Amazon eventually need to make changes in their strategy? If so, when? How will customers respond? By that point, will Amazon have captured so much of the market that they’ll have no choice but to keep shopping at Amazon?

Customers associate low cost and free shipping with Amazon. Could this recent change in shipping policy be the first of other subtle changes? As for the impact of it, the predictions are mixed. Some analysts feel it will have minimal impact on customer sentiment and will accomplish exactly what Amazon has set out to do.  Amazon Prime subscriptions and shopping cart totals will increase just in time for the 2013 holiday shopping season, which will help to minimize the losses stemming from shipping costs.

Other analysts wonder if it may shift customer perception of Amazon negatively due to the lack of direct communication about the change, or will drive certain types of customers to other retailers.

One thing is for sure – Amazon has always been highly data driven and it’s safe to assume that they have the data to back up setting this new threshold and have done their due diligence on the potential costs and benefits of the change.

You can bet that other retailers will be ready and willing to follow suit.