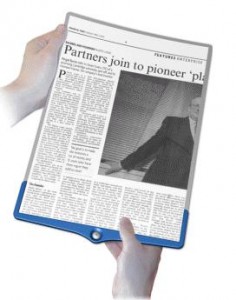 Here comes another possible savior for the desperate newspaper industry. Amazon is set to announce a new version of its popular Kindle eBook reader with a larger screen customized for reading newspapers, magazines, and textbooks on Wednesday, according to The New York Times.

The argument about why these devices could be a boon for newspapers is a familiar one: They could provide an environment for richer, more lucrative advertising, as well as a way for publications to bring back the subscription model, all for much lower costs than printing physical copies. (Newspapers make most of their money from ads, not subscriptions, but they’re emphasizing the subscription model because they haven’t figured out how to make as much money from web ads. Plus, publishing articles for free hurts old media folks’ self-esteem.) The argument applies not just to Amazon’s new device, but also to competing offerings from startups like Plastic Logic (pictured above) and media companies like Hearst.

So will it work? Well, the current version of the Kindle already offers subscriptions to various newspapers and magazines, and both Amazon and publishers tell The Times they’re satisfied with the results — but they aren’t sharing any real numbers, and there could be a huge gap between satisfaction with early results and a sustainable, long-term business.

I’ve gone on at-length before about why the eBook approach sounds silly to me, and I don’t want to repeat all of my objections here. I’ve also come to accept that when it comes to many of my preferences — being perfectly happy doing most of my reading on an iPhone; having no reservations about paying for a newspaper website subscription — may not be representative of a larger audience.

Still, hopes for turning subscriptions on eBook readers into a long-term business model seem pretty flawed. For one thing, so much of the rhetoric revolves around presenting articles in a manner that’s similar to traditional newspapers. I can’t imagine that many readers seriously care about this, especially readers under 40 or so, any more than most music fans care that MP3 sound quality doesn’t match vinyl. And the fact that newspapers are fighting to preserve their old business models, rather than trying to think of new ones, is troubling — that approach hasn’t exactly worked out well for the other media industries, such as music.

Also, if newspapers are convinced that no one wants to read their print editions because there are free editions available online, as reported in The Times, I’m not sure how eBook subscriptions won’t face the same problem — especially since portable electronic devices such as the Kindle will have to add web connectivity if they want to sell, so that means they’ll connect to free newspaper websites anyway (plus Google Reader). The only way this approach might work is if newspapers take down their free websites (good luck with that) or come up with ways to present a much richer, deeper experience on these devices than is available online.

There’s no official confirmation about the device yet from Amazon, but MediaMemo’s Peter Kafka notes that Amazon’s last Kindle event — the unveiling of the Kindle 2.0 at the Morgan Library — was held at a historically significant location, so the spot chosen for the upcoming press conference is telling: Pace University, the 19th-century home of The New York Times. Meanwhile, ZDNet’s Larry Dignan argues that from a business perspective, Amazon may be more interested in the textbook business than the newspaper one.