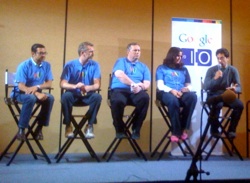 The question and answer session for the unveiling of Google Wave, the search giant’s attempt to reinvent communciation, just wrapped up. My biggest impression is that many journalists drank the Kool-Aid — they really believe that Wave has the potential, at least, to become the center of users’ communication. Not that I can blame them. I believe it, too.

I don’t want to repeat all the cool features that we’ve already listed, but I will say I’m very taken with the big vision that Wave could really become the tool that unifies all your communication and collboration, where you can access your email, your instant messaging, your documents, your social networks, your blog comments, and more. (I also want to use it for liveblogging.) And many of the journalists’ questions  at this morning’s session really seemed to take the big picture seriously. One reporter asked whether this will replace tools like Gmail and Google Docs. Another asked for more details about about Google’s strategy to try to replace email with Wave.

The response from the Wave team, however, tended to be relatively modest: “It’s still very, very early” was the most frequent answer. On the question of replacing Gmail and Docs, Vice President of Engineering Vic Gundotra said,  “There may be other places as well where you may see those exact capabilities.” In other words, this may be less about phasing out Gmail, and more about phasing Wave-type abilities into Gmail and Google Docs. In the long-term, however, while I may not get rid of my Gmail account, I could imagine Wave becoming the center of all my online activity, the way Gmail is now.

Another interesting tidbit from the session: Google co-founder Sergey Brin said that when brothers Lars and Jens Rasmussen (who also developed Google maps) came to him with the project idea, it sounded a bit out there.

“We’re going to reinvent communication, we just need 100 engineers who can go off to Australia for a while, and we’ll get back to you in a few years,” Brin recalled them saying. But executives decided to bet on the brothers’ track record. “We decided, collectively, to give them the benefit of the doubt.”