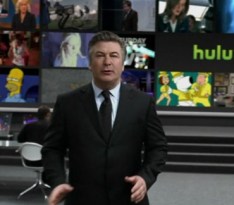 Hulu has released yet another peek at its monthly performance from comScore’s Video Metrix report. Long story short, the premium video hub is still growing in terms of unique visitors, while the amount of time spent on the site seems to be dropping.

For March, Hulu claimed the number three spot in terms of popularity, beating out other online video contenders like Yahoo, Microsoft, and CBS. In terms of traffic, this came out to 41.6 million unique visitors and 380 million streams. Compared to February, this represents a 19.7 percent increase in uniques and a 14 percent increase in streams. Though these are solid numbers, Hulu still fell behind online video giants Google (YouTube, et. al.), and Fox Interactive Media.

Despite Hulu’s uptick in traffic, the time users spend on the site has continued its downturn from previous months. March saw users spending an average of 57.9 minutes on the site, which is a noticeable drop from February (64.5 minutes) and January (79 minutes). To be fair, these numbers are still considerably higher than those of Hulu’s rivals (Fox’s users spent an average of 11.7 minutes on its sites). But it still seems worth mentioning that some of Hulu’s longest user visits (114 and 120 minutes in October and November respectively) came long before its expensive prime-time ad spends.

The larger question is whether the downturn in viewing time will ultimately hurt the site. On one hand, given the flexibility of Hulu’s ad platform, it seems unlikely that it’s missing out on too much ad revenue. Since day one, Hulu has done a good job of ensuring its video ads play regardless of where a user watches the content on the web. This virtually guarantees that anyone — be they long-time Hulu users or random online videophiles — is exposed to the brief commercials incorporated into the video streams. 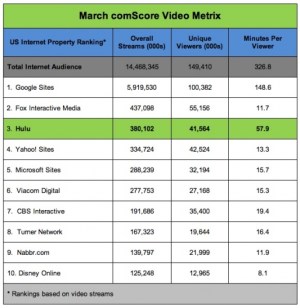 However, if Hulu wants to leverage the platform for targeted ad purposes, then it’s vital that the site glean as much information from each user as possible. Users’ viewing time is an important part of this equation because the longer a user spends on the site, the more Hulu stands to learn about their individual tastes in both content and ads. And, on a much more basic level, these numbers could spell trouble for Hulu’s destination site aspirations. After all, if Hulu can’t get users to spend more than an hour on the site, then it’ll never be able to best established giants like Google (whose sites collectively nabbed 148 minutes per viewer in March).

It’s disingenuous to claim that Hulu is in dire straights, especially when traffic is up and more content deals are reportedly on the way. But if March’s numbers are any indication, the site still has a long way to go before it can rule the online video roost.