Dogster, the social network for dogs and their owners, just converted $425,000 in bridge funds into additional first-round financing, reports VentureWire. After a profitable 2008, raising a second round isn’t as pressing, the company says — citing a broader trend of success for sites catering to pet enthusiasts.

The San Francisco company, which also operates Catster.com, has enjoyed high advertising CPMs for a while now — with a $2 floor, CPMs on its homepage range from $15 to $20, and on its newsletter from $20 to even $40. In an interview with startup blogger Sarah Lacy, Dogster chief executive Ted Rheingold attributed these figures to the company’s independent ad sales staff. The site decided to eschew Google AdSense and other ad networks in favor of its own sales team when it couldn’t meet the revenue demands of a larger staff (the average CPM with AdSense was about 28 cents). And this strategy has paid off, giving vendors a chance to up their returns with more custom-tailored and engaging ads — what Rheingold calls “advertising placements.” Advertisers have been so pleased, in fact, that Dogster has seen a 30 percent spike in ad bookings compared with this time last year. 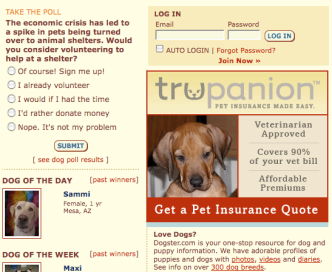 In addition to advertising, the company has supplemented its revenue stream with a premium subscription offering and the sale of virtual products and gifts. But it’s never really hit the skids financially, turning profitable as early as 2005, much to the surprise of everyone — especially the pet-oriented dot-commers left in its dust several years prior. Rheingold acknowledges that times ahead may be tough and that some booked advertisers may beg off later in the quarter, but is still gung ho about going after as sizable a piece of the $42 billion pet industry pie as possible.

It looks like Dogster will have some company, though, with peers like United Dogs & Cats, Fuzzster and PawSpot all contending for these dollars. But its competitors don’t seem to be faring as well, with sparser advertising and web information service Alexa showing steady declines in traffic. United Dogs & Cats raised an undisclosed investment round near the end of 2007, but Dogster appears to be way ahead of the game post-downturn.