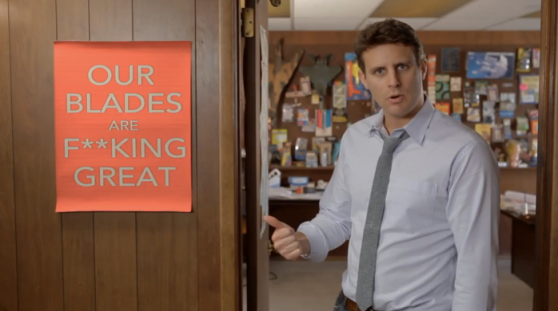 Guys: Dollar Shave Club says it’s trying to save your face — and your wallet

If you’ve used the Internet at any point in the last few months, then you’ve likely seen the promotional video for the company and its razors. The tag line: “Our blades are f**king great.”

Investors, it seems, feel the same way: Dollar Shave Club has netted $9.8 million in a Series A funding round led by Venrock.

The basic business model is this: Each month Dollar Shave Club sends customers the option of three razors, which are priced depending depending on the number of blades they have (the most expensive one, dubbed the Executive, comes with six blades, and runs for $9 a month).

For comparison, a pack of four Gillette Fusion razors costs $14.99. That may not seem like a lot of money, but it really adds up over time.

So far, guys have responded pretty well to the Dollar Shave Club approach. CEO Michael Dubin says that interest in the business has grown exponentially since the company’s relaunch in March.

With the funding, Dubin says the company will further increase its membership numbers and . A big part of that thrust will come from Canada, where Dollar Shave Club will expand to starting next week.

The big question with Dollar Shave Club, however, is this: Is it really even a tech company? Probably not, but the company has leveraged technology  to such an extent that its worth paying attention to for that reason alone.

Founded in 2001, Dollar Shave Club is headquartered in Venice, California. The company has to date raised $11 million.