Double Fine Productions wants to level up the quality of virtual reality games with its latest release: Psychonauts in the Rhombus of Ruin for the PlayStation VR. The $20 title debuts today on Sony’s VR platform for the PlayStation 4, and it will show that VR is starting to grow up.

I played a couple of levels of the game, which is a point-and-click adventure in VR. You teleport from one place to another and try to solve 3D puzzles using a different point of view. I talked about the design of the game and the studio’s first experience with VR in an interview with Chad Dawson, project lead for the game, and Tim Schafer, CEO of Double Fine, at the company’s headquarters in San Francisco. 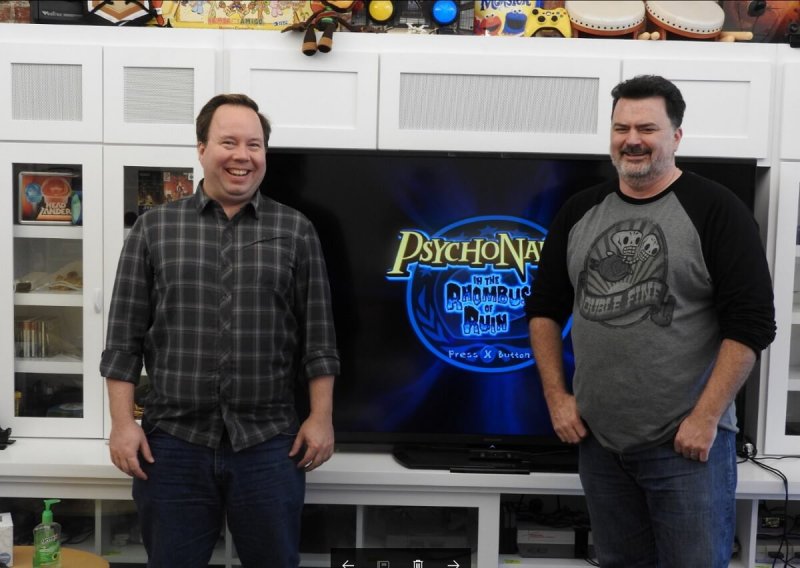 Chad Dawson: We try to mix it up a little bit between areas that are more puzzle-focused, where you’re moving stuff around, and then something like the path with the fish, where it’s more exploration and narrative. A little bit of Raz reflecting on his mission. You’re seeing a bigger space. It changes the pace for the player a bit.

GB: How long have you been working on this now?

Dawson: About a year and a half now. The total experience length is about three hours.

Tim Schafer: It’s not an experience. It’s a game.

Schafer: Lot of things out there are called experiences, and they’re more like tech demos. This is a game with a beginning, a middle, and an end. Puzzles, an emotional arc, story arcs for all the characters.

GB: Is this the first VR thing you’ve done?

Schafer: Right. Our first VR game and our first Psychonauts game in 10 years.

Dawson: We developed some stuff for the Microsoft Kinect and the Leap Motion back in the day. Some of the technology has similarities. But VR is its own thing, as you know. It’s funded by Sony. Psychonauts 2 was crowdfunded with Fig.

GB: How did you want to approach this?

Schafer: We knew we were making Psychonauts 2, and we had this piece of the story we just weren’t going to tell. Then the talk came about making a VR game. What can you do in VR, and what can’t you do? I don’t like moving around in VR because I get sick. If you’re standing still, how do you control the world? Well, psychic powers work for that. Making a Psychonauts game was a great opportunity to tell that little story that we couldn’t tell before, in between Psychonauts and Psychonauts 2. You go on a secret mission to rescue the head of the Psychonauts. It seemed like a great way to approach that story.

GB: It felt very comfortable to me.

Schafer: Yeah. I really sick in VR if you’re not strapped to a chair. There are very few VR games where you move a lot that I like. The ones where you teleport are much better. Our teleportation is contextualized in the game. It’s not just that you’re teleporting because you’re some magical creature that can teleport. You’re a psychic who can enter the brain of someone else and see the world through their eyes. Then we use that as a storytelling device where we show the world in different ways. Mia sees those guards on the bus as children, because that’s her point of view and she’s having a delusion.

GB: What else was involved in making it more comfortable for people to sit for a long time?

Dawson: That’s been a guiding principle. We knew we wanted it to be a seated experience. Obviously we talked about going into someone else’s mind as our kind of locomotion, moving around the world. We also wanted, when you use telekinesis to pick up objects and move them, for you to move them by moving your head around with your gaze, so it would feel like a psychic ability.

In designing it, we found that by using that motion to go around, you could place a character who was looking at a television screen, with their face aimed at the screen. But if you went into that character, you wouldn’t be able to see any other character to go to. You’d have to turn around in your chair or look around in 360 to look at that guy behind your shoulder. That’s not particularly comfortable either. It started to change our level design a bit, to where we would pair characters up, always giving you a character in front of you. Our design goal is that you never have to look outside about 120 degrees of view. There’s always something to interact with or another character to go to. That influenced us as we went along.

We also changed some of our puzzles to be less frustrating, less timing-based. Some of the initial ones where you move your head around, you had to do it very fast. You only had a few seconds. People would be swinging their necks around and they’d get tired after a few minutes of playing the game. So we shifted our puzzles to be more about figuring out what to move and where to put it, how combinations of things work.

GB: Did you have a lot of puzzles designed before you did that kind of testing?

Dawson: We were lucky enough to find that out early on. Some of our initial prototypes were that way. As developers you’re sometimes in the headset for eight or more hours a day, so you pick up on it quickly, especially if you’re sensitive. Any time we ran people through and asked people what we could change to make it more fun—ideas would come up like, “Let’s make the player have to do it in three seconds! Let’s make them have to be super precise!” But we backed off from that design a bit and tried to make it more forgiving for players.

GB: Did you have ideas around this before VR started to become more popular? Did you ever envision Psychonauts as a more three-dimensional game like this?

Schafer: We never thought of it as a first-person game. We thought we were always going to do another third-person platform game. But when we started thinking about a VR game, that’s when it turned into more of a gaze-and-click adventure, kind of like Broken Age, a point-and-click adventure. It seemed like the most natural genre for this technology.

GB: Are you able to take this to other platforms beyond PSVR?

Schafer: We’re focusing on this platform for now. I like the PlayStation VR because of the price point, the ability for a regular consumer to understand what they’re buying. They don’t have to build a special machine just to do it. They just need a PlayStation Pro. It’s a comfortable headset, the way it has a crown, how it sits on your head. You look cool when you’re using it, because it’s got lights on it. [laughs]