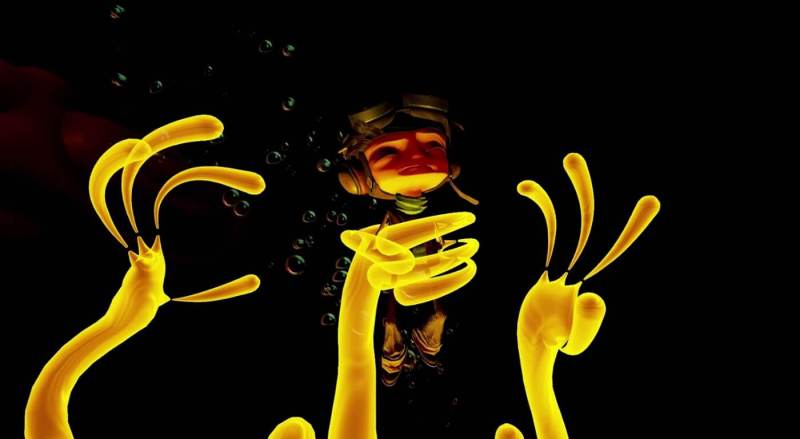 Above: Raz returns as the hero in Psychonauts in the Rhombus of Ruin.

GB: Did you do much testing to see people’s reactions?

Dawson: We did. There was a lot of internal testing when we were starting out, but as the game started—we showed it at E3 last year, and at Sony’s PlayStation Experience last fall. Those were both great. We also bring a lot of people into the studio. We probably had more than 20 or 30 people come in to play through it and give feedback. There’s nothing better than seeing someone get stuck or not find something to let you tweak it. Also, a range of ages helped. That’s something we’ve noted with VR. Older people maybe don’t want to move around as much. Tim jokes about his back.

Schafer: My neck, too.

Dawson: The range in which people are comfortable moving their heads is different.

Schafer: I would have thought, when VR started—let’s take advantage of what VR can do. It’s a full 360 world. You’re in a sphere of stuff you can look at. But in practice you don’t really want to crank your head around to look behind you all the time.

Dawson: Or looking up for extended periods. We started thinking we could put in all this stuff above you. That’s nice to glance at, but if you’re looking up for a long time, you get sore. Different VR headsets are pushing a different field of view, but there’s also your field of focus as a player. Until eye tracking tech and things like that come online, you’re going to have to turn your head to look. In real life most people look with their eyes more than their head. Learning to look with your head—your head isn’t built for that. It becomes sort of like a tennis match, looking back and forth. You want to be wary of that. You don’t want to make people do that very fast or for a very long time.

GB: Is there anything you’ve figured out that’s particularly good for an immersive experience in VR?

Schafer: We definitely felt that your connection with people is really strong in VR. When Mia is first talking to you and she’s bending over and making eye contact with you, it’s really necessary to—if you move your head, characters have to track your eyes. Otherwise you’ll really notice it in VR. You have to make sure you’re doing it better than before, but at the same time, it’s much more impactful. Characters looking at you, facing you, is more intense. You notice more emotional cues from them than you would when you’re normally playing a game. 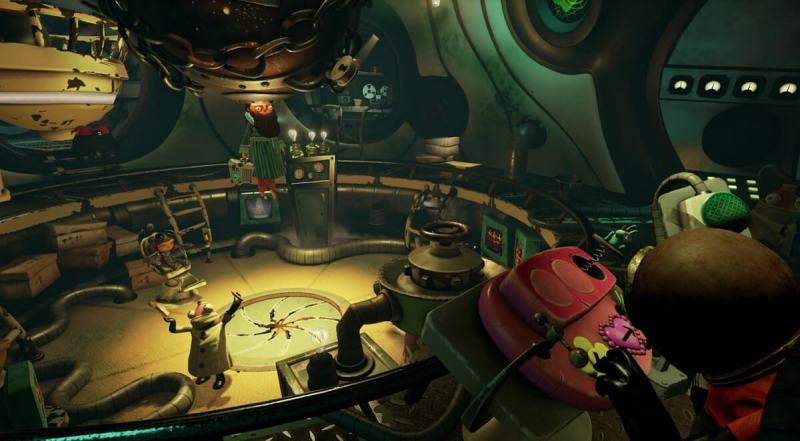 Above: You have to explore this space to find out where Truman Zanotto is being held captive.

Dawson: And the 3D positioning audio, the more you can use that, the better. Even if it’s just something like ambient drips behind you. Hearing a character make a sound and using that to draw your attention—most games would put a big flash there, something graphical, but in VR there’s so much to look at.

In the jet we have a tutorial monitor that’s flashing at you. It didn’t have any sound at first, but we thought people would see it flashing. But no, because there’s so much else to look at. Hearing a sound over there, though, people will turn their head. That was much more effective than we initially thought. We worked with our audio team to put a lot of cues in the world. When people hear that for the first time – “It’s coming out of this ear. No, it’s coming out of that ear,” picking it up as they turn their heads. People haven’t experienced that as much in most traditional games.

GB: It felt like it took me a little longer than usual to get through the tutorial.

Dawson: We designed that a bit to let you play around. It’s not super gating. With any person coming into a VR world, particularly people trying VR the first time – and I still think there will be a lot of people experiencing VR for the first time – you want to give them a bit of space. You don’t want to make them feel rushed. You want to give them a chance to explore. With most games there’s a sense of, “Okay, let’s get players through this fast,” but most people buying this game and playing in their own home will want to sit back and relax and get used to the space. It’s something developers should take into consideration, easing players into VR a bit.

GB: Do you think this is something that’s going to catch people’s attention?

Schafer: And that have a lot of interesting characters and humor in them. It stands out.

Dawson: I’m glad there’s a wide range. There’s a lot of action-focused, or more mechanical-focused puzzle games in VR. It’ll be great to see more games coming out. But this game has its own unique spot, a story-driven game with these characters. There are a lot of Easter eggs, hidden things you can find if you look.

Schafer: References to both Psychonauts and Psychonauts 2. We keep those threads going for people who are paying attention.

Dawson: A lot of people in VR, because you can, they like looking at the underside of a table or a chair, or peeking into a cabinet to see what’s inside. It almost becomes a natural thing once people figure out they can find stuff. Once they figure out they can move their head around and look behind things ….