A startup called doubleTwist wants to make it easier for you to share media like music files, photos, and videos across friends and devices. After launching a test version of its Mac application in February, it’s just released a PC version as well and is announcing a $5 million second round of funding from former Walt Disney President Michael Ovitz, former Warner Music Head of Digital Strategy Alex Zubillaga, and others.

You can watch a demo video at the doubleTwist site, but the basic concept is simple. Once you load the application, you should be able drag-and-drop media files to any device or any friend’s online account. On the backend, doubleTwist handles thorny issues like file format compatibility. Not only does that eliminate worries about compatibility, it also means you don’t have to install new software whenever you connect a device. It also lets you upload files to online services like Facebook, Flickr, and YouTube. 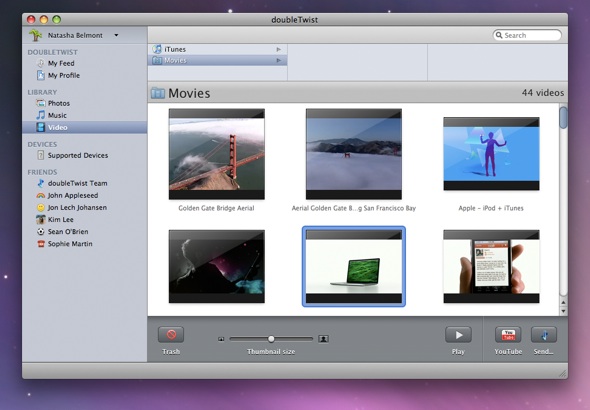 While Ovitz and Zubillaga made their investments as individuals, it’s interesting to note the connection to traditional media companies. I can see why someone like Warner Music, for example, might be excited about any product that weakens the dominance of Apple’s iPod and iTunes store in the digital music market. And while I’m perfectly happy transferring music from my MacBook to my iPhone using iTunes (at least I bought the music from Amazon), I think a product that encourages greater flexibility and portability is a good thing.