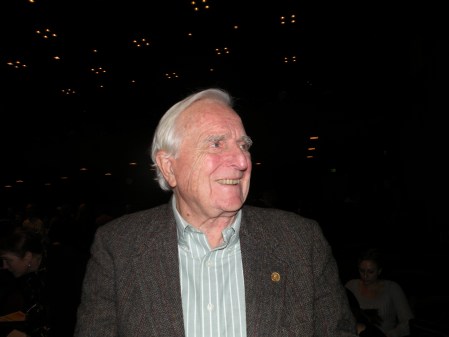 The tech industry slowed down a little yesterday to look back in history on this 40th anniversary of the first public demo of the computer mouse.

I sat in the audience behind Doug Engelbart, who created the mouse — as well as collaborative editing and a number of other innovations that kicked off the age of personal computing. He did so as part of the Augmentation Research Center at SRI International. The Center invited hundreds to yesterday’s event at Stanford University.

It was cool to see Daniel Borel, cofounder of Logitech, hand over a commemorative mouse that marked the company’s 1 billionth mouse produced — the company’s been making mice since 1981. It took 22 years to hit the first half billion sold, and only five years to hit the second half billion, Borel said. [Update: the actual billionth mouse is in transit.]

Engelbart, who sat in the audience and laughed at some of the reminisences, said to me about getting the billionth mouse, “It’s unbelievable! Can you imagine, a billion?”

Among the speakers on hand to honor Engelbart were Robert Sproul, a fellow at Sun Microsystems, Don Andrews, retired from Adobe, and William English, formerly of Sun, all of whom say they were greatly inspired by the innovator.

In a conversation with New York Times writer John Markoff, Taylor summed up the significance of Engelbart’s demo 40 years ago. He said that before that moment, computers were all about number crunching. Afterward, people saw they could be more. Engelbart’s own goal was to augment human intellect with computers.