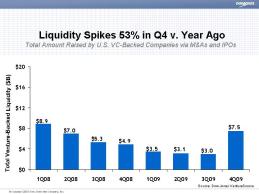 The latest Dow Jones VentureSource liquidity report, released today at the company’s website, forecasts an exciting return to mergers and acquisitions after a year of mostly nothing.

This isn’t armchair prognostication, it’s an undeniable, measurable trend. For M&A, the fourth quarter of 2009 made up for the three lousy periods that preceded it. Forty-four percent of the year’s total liquidity was generated in the last three months of the year. And the coming first quarter of 2010 should beat the pants off of last year’s Q1.

Here’s what VentureSource’s analysts forecast for 2010: 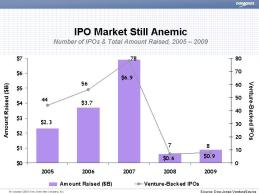 IPOs, scarce in 2009, will return in modest numbers. Only eight companies completed IPOs, raising a total of $904 million. The biggest was the $371 million offering by lithium ion battery maker A123 Systems of Watertown, Mass.

(At VentureBeat, we’ve dubbed the high sale prices for companies that make technologically very sophisticated non-Web-2.0 products like batteries and IT tools “Revenge of the South Bay.”)

2010 should be a busier year, if not a blockbuster year for IPOs. VentureSource director of global research Jessica Canning wrote in a prepared statement, “With 25 venture-backed companies currently in IPO registration,” she wrote, “it is clear that many entrepreneurs and their investors expect the market to improve in the coming year.” 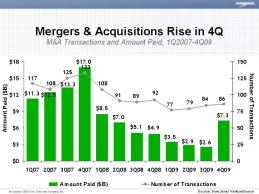 The total volume of M&A most recently peaked in the fourth quarter of 2007, when 133 deals totaled $17 billion in sales. After that, the market nose-dived into 2008, bottoming out in last year’s third quarter, when 84 deals netted only $2.6 billion. In the fourth quarter, a similar number of deals racked up three times as much liquidity. 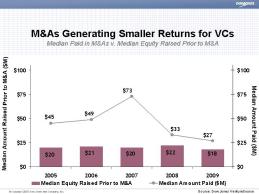 VCs will continue to see lower returns from most acquisitions. The average price paid shot from $19 million in Q4 of 2008 to $145 million, an eightfold increase. Canning says that figure was skewed by a handful of large acquisitions topped by Amazon.com’s $847 million purchase of Zappos.com, a single deal that accounted for more than 10 percent of the quarter’s total.

But the median amount paid throughout 2009 was still below the levels seen in 2007, she concludes, “a positive sign for acquirers looking to purchase companies at reasonable prices.”