Investment in Web 2.0 start-ups may be peaking, according to new data from Dow Jones VentureSource. Among other warning signs is the fact that Facebook accounted for a whopping 22 percent of the $1.32 billion in Web 2.0 investments made in 2007.

The number of investments in Web 2.0 companies (namely, websites that emphasize social tools like social networks and blogging) increased 25 percent in 2007, from 143 deals to 178, VentureSource says. That seems pretty healthy, but it’s nowhere near the growth rates from 2002 to 2006, when the number of investments doubled every year.

The numbers look especially weak for Silicon Valley. When you take Facebook out of the equation — the company’s $240 million investment from Microsoft (our coverage) and $60 million raised elsewhere add up to more than seven times the size of the next-largest deal — investments in the San Francisco Bay Area fell to around $421 million, a 3 percent drop from 2006. (See chart below.) 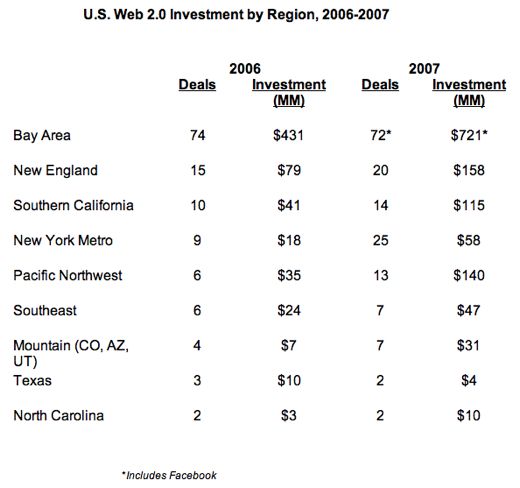 Of course, Facebook is the most high-profile Web 2.0 company around, so it seems a bit silly to discount its success. Still, those numbers are sobering, especially when you realize that growing economic problems, mostly related to the subprime crisis, are also contributing to slower investment (read more of our coverage here and here). For the foreseeable future, it looks like Web 2.0 companies — and start-ups in general — are going to have a tough time raising venture dollars. 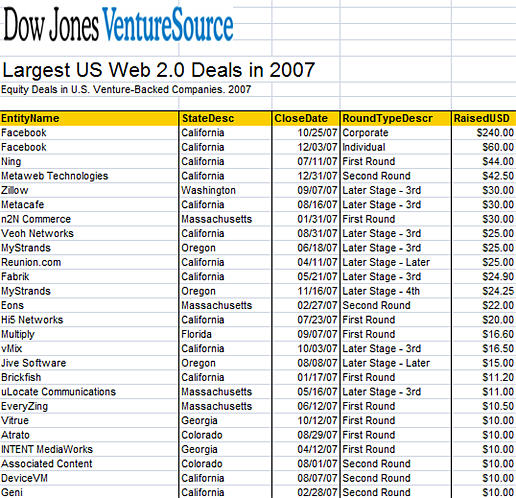