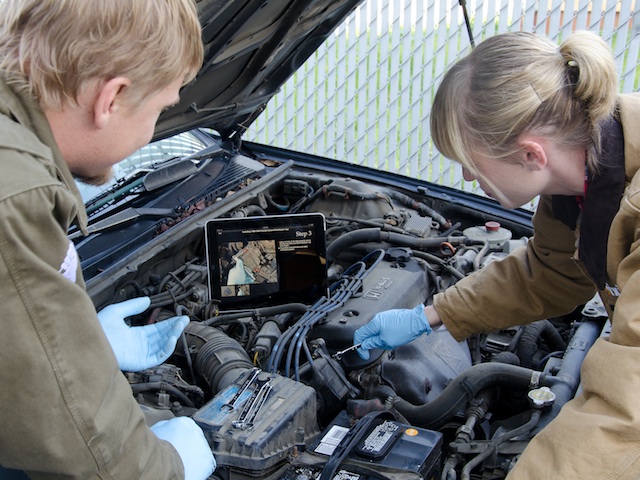 If you knew you could use an iPad-based manual to fix a Dewalt cordless drill, you might be more likely to buy that model than the Black & Decker model sitting next to it on the shelf.

That’s the bet behind Dozuki, a new service aimed at helping companies create their own easy-to-update digital service manuals.

Dozuki, which launches its preview site today, comes from the team behind open-source DIY repair site iFixit, which has built a successful business by publishing how-to guides for everything from replacing a cracked iPhone screen to replacing the turn signal lamps on your Hummer. iFixit’s repair manuals are modified wikis, which anyone can contribute to, and they’re available free online. The company makes money from a parts business, selling components needed for the repair jobs described on its site.

Unlike a typical wiki, which is basically unstructured text, the publishing system behind Dozuki and iFixit is built for publishing how-to articles. For instance, articles can be made dependent on other articles (you have to remove your car’s headlights before you can remove the front bumper), and how-to articles can include lists of required parts and tools, which can in turn link to an e-commerce site so readers can purchase what they need.

The same site infrastructure is also behind O’Reilly’s Makeprojects.com, a how-to site that includes wiki-fied versions of every DIY project published in Make magazine.

“We finally said, all right, there’s enough demand for this we need to spin this off as a separate venture, to enable anybody to set up manuals online,” Wiens said.

Dozuki will let product manufacturers create branded versions of iFixit-like repair manuals online. Those manuals might not be publicly-modifiable wikis, since for liability reasons a company might need to vet every change to a manual it publishes.

These online manuals might not even be readable by the public and could instead be aimed at a company’s service technicians. Currently, those techs typically rely on PDFs, which might be as much as a year out of date and don’t include such niceties as 3-D renderings, videos or animations, all of which a Dozuki-powered manual would. Dozuki manuals would also be much easier and faster to update: A technician could submit a change from the field, and it could be verified by headquarters and published to the manual within a few days instead of months.

“There are billions of dollars invested in writing service manuals, and even more in using them, and the software is just completely shoddy,” Wiens said.

While the topic might seem dry, Wiens sees manuals as a competitive advantage for the companies that use them. As consumers become more value-conscious, they’ll see the worth of an easily-repairable appliance or gadget that could last for decades instead of just a year or two, he argues.

The name “Dozuki” comes from a type of Japanese woodcutting saw. It cuts very precisely, but only when you’re pulling it back. if you try to force it to cut while pushing it forward you’ll break the saw’s teeth. Knowing that one bit of information is the key to using that kind of saw.

“That’s what we’re doing with manuals. Tech documentation seems boring, but it’s really important to give people that one piece of info they need to be successful,” said Wiens.

Dozuki will begin beta-testing soon and should be available to customers in the fall. It will be sold as a service, with a monthly cost starting at $100 per month.

iFixit was founded in 2003 and is based in San Luis Obispo, Calif. The company is self-funded (and has been profitable since its first month in business, Wiens said), had about $3 million in revenue in 2009 and employs about 30 people. As a repair guide it competes with eHow, Instructables (acquired by Autodesk earlier in August, 2011) and Howcast; as a parts business it competes with a wide variety of online electronics components suppliers.