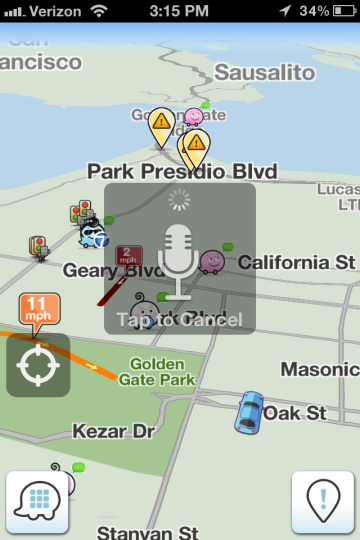 In an effort to cut driving distractions even further, the crowdsourced driving app Waze today has added the ability for fully hands-free voice control to report traffic situations — bringing Siri-like functionality to the free app before Apple has released its own Siri API.

Waze’s solution is actually more advanced than Siri in one key way: you don’t need to awkwardly hold down any buttons to activate voice commands. Instead, Waze’s voice controls are activated simply by waving your hand over the iPhone’s screen while driving. Waze uses the iPhone’s proximity sensor to enable this functionality, and as you can see in the video below, it’s a particularly nifty gesture.

Once activated, you can speak commands to Waze like “report traffic,” which will let you give an account of the traffic ahead, or you can change your route by telling the app to “Drive home.” The company is utilizing the open source API OpenEars to power its voice controls, but it’s open to moving to an official Siri API when Apple makes it available.

Waze VP Community Geographer DiAnn Eisnor tells me that they’ve been working on the hands-free feature, which has been one of the most requested from its rabid fanbase of 12 million users, for months. The company too found the feature important, as it will remove yet another major distraction for drivers while using its app. Waze has also disabled text input in the app while your car is in motion, which will discourage drivers from focusing too much on their phones.

The updated Waze app does take advantage of Siri when it comes to more complex voice controls, like looking up a specific address or local business, but it seems to just be using Siri’s dictation capabilities. The update also includes the ability to share your destination and ETA, and so you can tell your friends when you’re going to be late.

The voice control feature will first appear on the Waze iPhone app, mainly because it was the idea of Waze’s core iPhone engineer. It’ll hit other platforms eventually.