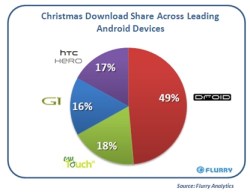 T-Mobile’s myTouch 3G and G1, and the HTC Hero sold by Sprint, totaled roughly as many apps as those downloaded the Verizon/Motorola Droid phones on December 25.

Is this the new landscape, or was it just a one-day fluke? Flurry’s head of marketing, Peter Farago, emailed in response: “In our estimation, Droid numbers will continue to drive a larger share of downloads for the foreseable future until another Android handset can displace its position as the fastest-selling Android phone.  Also, we have to remember that this is the most marketed Android phone to date, and on Verizon, which has 70 million subscribers.”

Still, Apple’s App Store continues to dominate the app market. iPhone and iPod Touch users downloads thirteen times as many apps in December as all Android phone users combined, Flurry says. And Apple’s December download volume will be 51 percent higher than November’s, if Flurry’s calculations are correct. By contrast, Android Market downloads only increased 22 percent from November to December.

So while the Droid is the hotter phone right now in terms of buzz, the numbers point to Apple’s continuing dominance of the app world going into 2010.