Dropbox today launched a very interesting feature: file requests. The new option, which essentially makes it easier to get files from multiple people, is available now to all Dropbox Basic and Pro users, with Business users getting the update “in the next few weeks.”

Update on July 7: File requests are now available in Dropbox for Business.

In short, you can now ask one or more people to upload photos, documents, or any other files to a Dropbox folder you specify. All you need to do is put together the request, and Dropbox generates a link that handles the rest.

File requests lets you get files from anyone, regardless of whether they have a Dropbox account. Because you’re not dealing with the limitations of email attachments, receivers of the file request can upload files as large as 2GB. Furthermore, regardless of how many files you collect and from how many people, everything is organized into a single folder, available on all your devices with Dropbox.

Here is how it works.

To start, log into Dropbox.com and on the left-hand side, click on the new “File requests” option. If this is your first time logging into Dropbox since the feature’s debut, you should also see a quick introduction to file requests.

On this page, you can see all your existing file requests, which you can filter by open or closed, and by how many files they have each accumulated. You can of course also make a new file request. 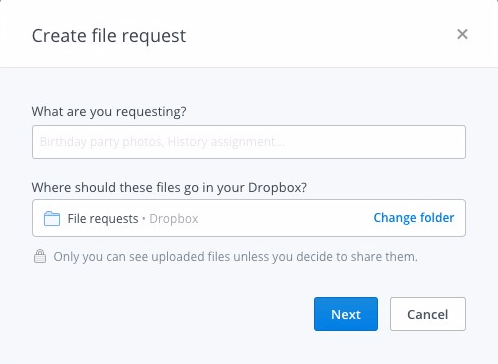 When you choose to create a file request, you have to include a description of what you’re asking for, and specify what Dropbox folder you want the requests to go in. 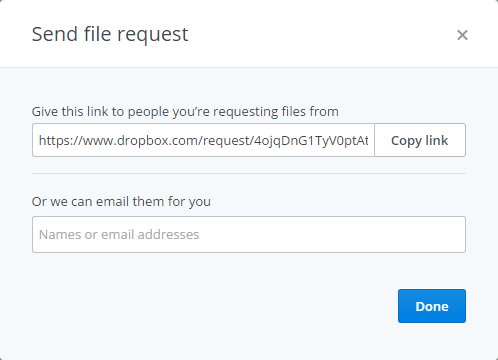 Dropbox can then send an email to whomever you want to requests files from, but you can also take the link and give it to them via other means (like a text message).

When you get a file request, you’re taken to a temporary page from which you can upload files to Dropbox in just a few clicks. You’re also asked to fill out your first name, last name, your email address (if you’re logged into Dropbox, this is done for you). Dropbox then sends you an email confirming what you uploaded.

That’s it. The files are now in the requester’s Dropbox. At any point after making a file request, you can close it, which means the temporary link stops working and the receivers can no longer upload files to your Dropbox folder.

File requests works best on the desktop, which isn’t surprising given that’s where most file uploading occurs. Users can choose from local files or from their own Dropbox account. On mobile, you can upload files from the file system on Android devices and the Camera Roll on iOS devices.

ChenLi Wang, the product lead for file requests, told VentureBeat that Dropbox has been using this feature internally for a few months, though he noted that “a couple dozen people across the U.S.” got to try it in alpha as well. A slew of use cases have emerged in this time: collecting bids from contractors, weekly reports from colleagues, files from clients, vacation photos from family members, and so on.

One example Wang gave was particularly neat. When a teacher wants to take students on a field trip, he or she needs to get parents to sign a permissions slip. Instead of dealing with email attachments, faxes, text messages, USB sticks, physical copies, and so on, a Dropbox file request takes the hassle off the teacher and distributes it across all the parents.

The point here is that file requests scale with the number of people you need to ask for files. Dropbox is essentially introducing a new sharing model: many-to-one.

It’s really quite brilliant, and we expect other major cloud file-sharing services will not have much of a choice but to follow suit. To be clear, smaller cloud providers have offered such a feature before, but this is the first time a major service like Dropbox has put its own spin on it.

File requests can still improve in many ways. Dropbox is planning additional controls and administrative logging for its Business tier, but it’s also clear the company still has to integrate file requests into its mobile apps and give users even more control as to where to upload files from.

Still, this is a great start. Unlike many of Dropbox’s new features, this one isn’t just another iteration. File requests solve a real problem, and solve it well.