Security camera maker Dropcam released its newest camera today, with new features to help you stalk your own house.

“Dropcam HD [is] a product that introduces quality hardware and intuitive user experience to a space that has missed it completely,” said Greg Duffy, Dropcam’s chief executive officer and co-founder, in a statement.

Dropcam lets you monitor your home from a wall-plug-in camera that can record up to 30 days of video without running into battery issues. The flagship camera connects to the Internet via a wireless connection and stores this video in the cloud, making it accessible through a DVR player or streaming. The company, which originally employed a third party to create its cameras, has taken on the process itself now and has added ways to not only watch your house, but interact with it from afar. 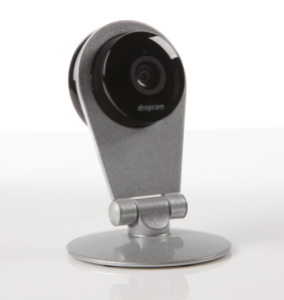 The new camera, Dropcam HD, has a totally new look to it. The lens is round, small and black in comparison to its clunkier, white forefather. The lens can fit in your palm, and comes with a removable stand. It’s power source is still a wall plug, which is inconvenient for ceiling fixtures, but at least the camera should never die on you in the middle of the day.

Before, the camera could pick up audio and movement, but now it can also pick up light change and can toggle between a night vision and daylight. The camera also lets you zoom in from afar. Some may find this more useful if they want to zoom in on a particular door, or keep an eye on the jewelry box. The weirdest, but perhaps best feature, however, is the new two-way audio.

Robbers in your house? No big deal, just yell “GOTCHA, PUNK!” That would be my choice, at least.

Dropcam was founded in 2009 and has raised $5.8 million from Accel Partners and a number of angel investors including Bradley Horowitz. The camera is priced at $149 and is available for pre-order.