Dropcam has come a long way from selling someone else’s hardware.

The home surveillance hardware company, which started out by selling cameras made by Axis, is updating its product line again with the $200 Dropcam Pro, a device that improves on the Dropcam formula in just about every way.

The most noticeable change this time around is the device’s video quality, which is now fueled by a six-element lens and a sensor that’s twice the size of the one found in the previous Dropcam. This means better video, especially in lowlight situations.

The new Dropcam Pro also offers a 130 degree field of view, which is a noticeable 20 percent increase over the Dropcam HD (which is now known simply as “Dropcam”).

Translation: Regardless of what you’re recording with the Dropcam Pro, it’s certain to look good. 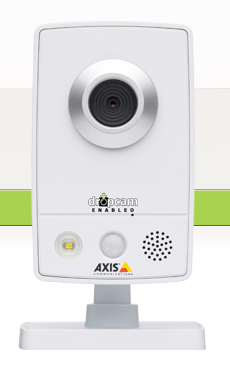 Above: This is what Dropcam’s camera looked like only a few years ago.

But the Dropcam Pro is more than an upgraded camera; the device is also Dropcam’s first play to be at the center of the connected home. Alongside all the internal upgrades, the Dropcam Pro also supports Bluetooth Low Energy, which, down the line, will allow all sorts of sensors to talk to it.

It’s a strategic move that Dropcam hopes will ensure the device is at the center of the connected home, not the periphery.

But all of these upgrades are hardware ones, and hardware is only half of what Dropcam is known for. What about the software?

Dropcam has announcements there as well. Alongside the Dropcam Pro, Dropcam is launching a beta version of Activity Recognition, its computer vision software.

With the feature, Dropcam will be able to understand a scene rather than just record it, so it can alert users only when certain kinds of events are happening.

It sounds like a simple task, but figuring it out was a big part of the reason Dropcam raised $30 million back in July. Duffy wanted to make sure he had the right team for the job.

“We want to be able to look at a video and pare it down to just the important parts,” Duffy told us after the announcement in July. ”We really want to understand the rhythm of people’s lives and tell them only what’s important to them.”

Oh, and in case it wasn’t clear from the photo above, the Dropcam Pro is trading the silver exterior of the previous Dropcam for a sleeker black. “We decided that “Pro” necessitated a higher-end color,” Duffy said.