DuckDuckGo will be one of three alternative search engines offered by Google during new Android phone setups in every European country, while Bing will be an option only in the U.K. However, given that this was a closed auction process, it’s difficult to know which search providers applied for inclusion in which markets — it could be that Microsoft only applied for Bing in the U.K.

By way of a quick recap, EU antitrust regulators hit Google with a record $5 billion fine in 2018 over the way it bundled its services on Android, claiming that the company forced manufacturers to preinstall certain Google apps to gain access to others. While Google (correctly) argued that manufacturers are free to use Android as they wish, given that the operating system is released under an open source license, to offer core services such as YouTube and Google Maps, they have to preinstall a broader array of Google apps — including Chrome and Google as the default browser and search engine, respectively.

In response to the fine, Google overhauled its Android licensing model in Europe, electing to separate Google Search and Chrome from its other suite of apps and to offer different licenses for each “bundle” — which it would charge for. As part of measures to placate European regulators, Google started suggesting alternative browsers and search engines for Android users, though these were in addition to Chrome and Google Search, which were still set as defaults. The next step to appease regulators was an auction process that would give alternative search engines a better chance to become the default provider on mobile devices in Europe. The winner would agree to pay Google every time a user chose them as the default search engine (regardless of whether the user later changed their choice).

Not every Google Search rival was ecstatic about this auction process. Ecosia, the Berlin-based not-for-profit search engine that plants trees with 80% of its surplus income, called this an “affront” to the EU’s ruling the previous year. And Cliqz, a browser that sports its own built-in search engine, said the auction “obstructs the market for competitors.”

Needless to say, neither Ecosia nor Cliqz entered the auction process, and as a result they don’t appear as a default choice anywhere in Europe.

“We believe this auction is at odds with the spirit of the July 2018 EU Commission ruling,” Ecosia CEO Christian Kroll told VentureBeat. “Internet users deserve a free choice over which search engine they use, and the response of Google with this auction is an affront to our right to a free, open, and federated internet. Ecosia is the largest European search engine, which begs a question: Why is Google able to pick and choose who gets default status on Android? Planting trees in biodiversity hotspots is our priority — this means that biddings processes like this cut out purpose-driven search engines like Ecosia.”

The winners by market

The options vary by country, with Google’s Russian rival Yandex showing up in Estonia and Finland, and meta search engine Info.com, which aggregates results from multiple search providers, appearing as an option in all 31 markets across the European Economic Area (EEA), much like DuckDuckGo. 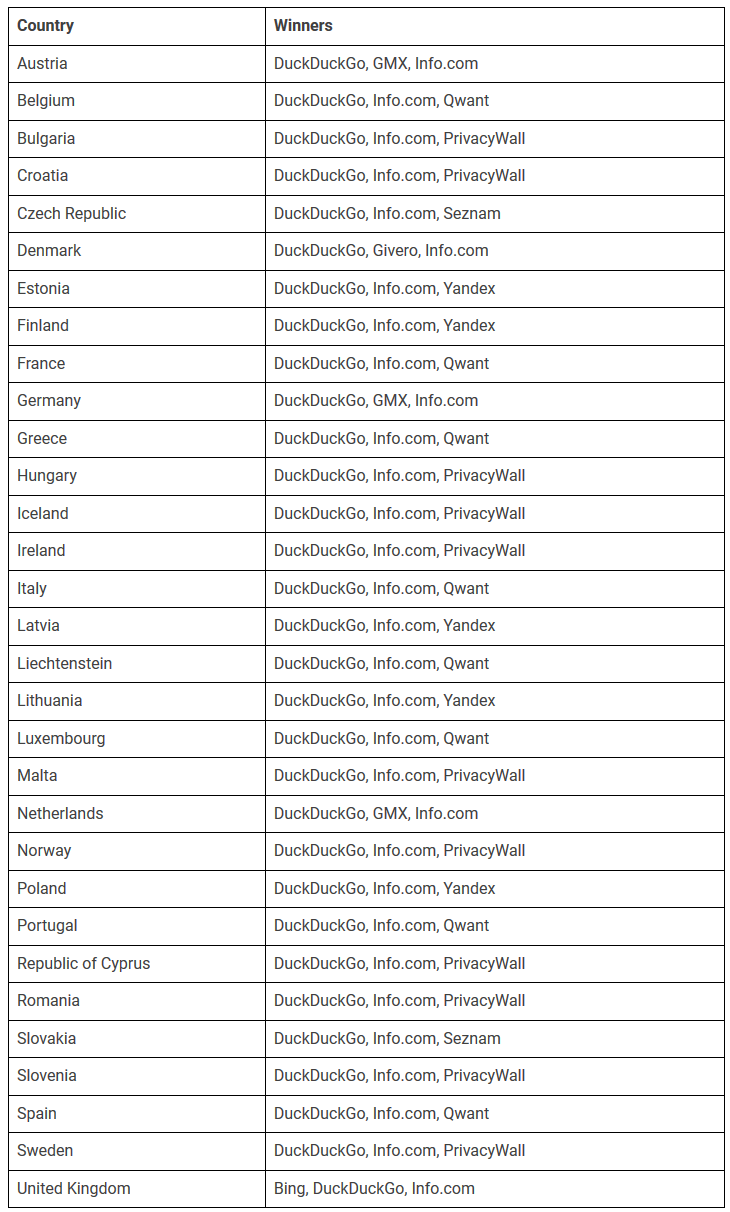 Above: Android choice screen options in Europe (March to June, 2020)

Upon selecting an option, the user will then access that search engine by default through the search widget on their device’s homescreen, and it will become the default search engine in Chrome if it’s installed. Google will also install the Android app of the chosen search engine provider if it isn’t already installed.

These options will start showing up on new or factory-reset devices from March 1, 2020 for a four-month period, after which Google will repeat the auction process again for each quarter. This appears to be at odds with Google’s original plan — back in August it said that it would operate the auction on an annual basis.

At any rate, the entire auction process could still come unstuck, with Ecosia already planning to raise its concerns with European regulators.

“Now that this process has come to a conclusion, we’ll raise our broader concerns over Google’s monopolistic behaviour with European Union legislators — we’ll also look at other ways to work with regulators to challenge this result,” Kroll continued. “If this were to go unchallenged, we firmly believe that this would set a dangerous precedent over how large technology firms address competition rulings.”