One of PC gaming’s most storied, longest-living, and hard-to-get-into games is coming to Steam after 12 years. And it’s getting a new look that could help nincompoops such as me get into it.

It’s time for Dwarf Fortress — the work of brothers Tarn and Zach Adams and their Bay 12 Games — to come to Steam. It launched in August 2008, and in many ways, it still looks like a game from 1988. It’s one of gaming’s landmark designs — a blend of construction and management sims with roguelikes. It’s unique, and it helped spawn Minecraft and a host of other games. Dwarf Fortress has even made its way to the Museum of Modern Art.

The original Dwarf Fortress will remain free. The version coming to Steam and Itch.io for $20, and indie studio Kitfox Games will publish it. This Canadian company has seen success with Moon Hunters and The Shrouded Isle, and its next game is the role-playing Boyfriend Dungeon (you date your weapons, or as we said, it’s like Tinder for swords). Kitfox said that it will receive 20 percent of each sale after Steam gets its cut, which it says is a lower percentage than most publishers, leaving 80 percent for Bay 12 Games.

I had a short interview with Tarn and Tanya Short, a cofounder of Kitfox Games. They want more people to get into Dwarf Fortress — most game designers and their publishers would like that, as this means more sales and more people enjoying their work. But Tarn also mentioned the uncertainty that comes from getting older and relaying on just crowdfunding to support their studio. 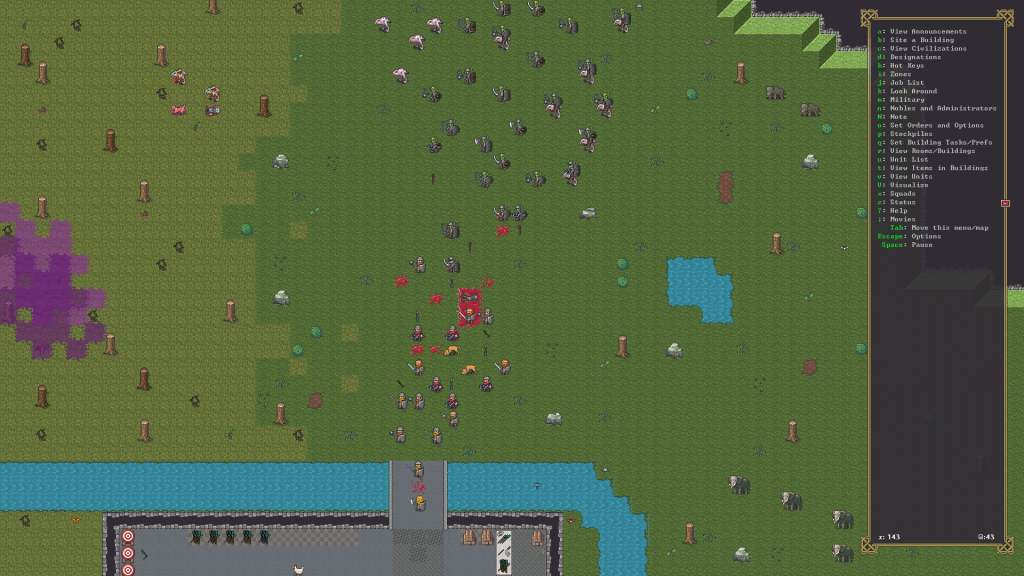 Above: Dwarves and Goblins that look more like dwarves and goblins!

The obvious change here is the graphics. Dwarf Fortress is a hard game to make sense of for some players, as the items, monsters, and locations are often just made of letters and other characters. The Adams, who have worked on their game now for about 16 years, enlisted some of their community’s best modders to add graphics to their beloved classic. The idea here is to help get others into Dwarf Fortress (such as nincompoops like me).

“Graphics are going to help a lot with how impenetrable the game has been for people up to this point,” Tarn said over email. “It should be easier for most players to judge a 32-by-32 image of a patch of grass than the jumble of apostrophes, commas, and periods that we normally put on the screen. Also, a goose, goat, and goblin wrestler will not all be represented by a white ‘g’!”

This new Dwarf Fortress is also adding in more tools to help you figure out what’s going on. “Accessibility is one of the important reasons we’re bringing Dwarf Fortress to Steam.  This will come with some additions to help people learn how to play the game,” Tarn said.

From modders to developers

The new graphics and audio is the result of Kitfox and Bay 12 bringing on a pair of Dwarf Fortress modders to help with this new project: Mike “Mayday” Madej and Patrick Martin “Meph” Schroeder. And they got paid for their work. These aren’t mods.

“[They] are starting from scratch and making an entirely new tileset, and yes, they are being paid a rate they feel is fair for the work, so as far as Kitfox and Bay 12 are concerned, for this project they are less modders and more contractors,” Kitfox cofounder Tanya Short said over email. “If they choose to do other modding activities on the side, that’s fine, but they’ll have to go through the same Steam Workshop process as everyone else. Dabu is a new composer, fresh on the Dwarf Fortress scene, and also created the audio from scratch, all under contract.”

Why now, and why Steam and Itch.io? 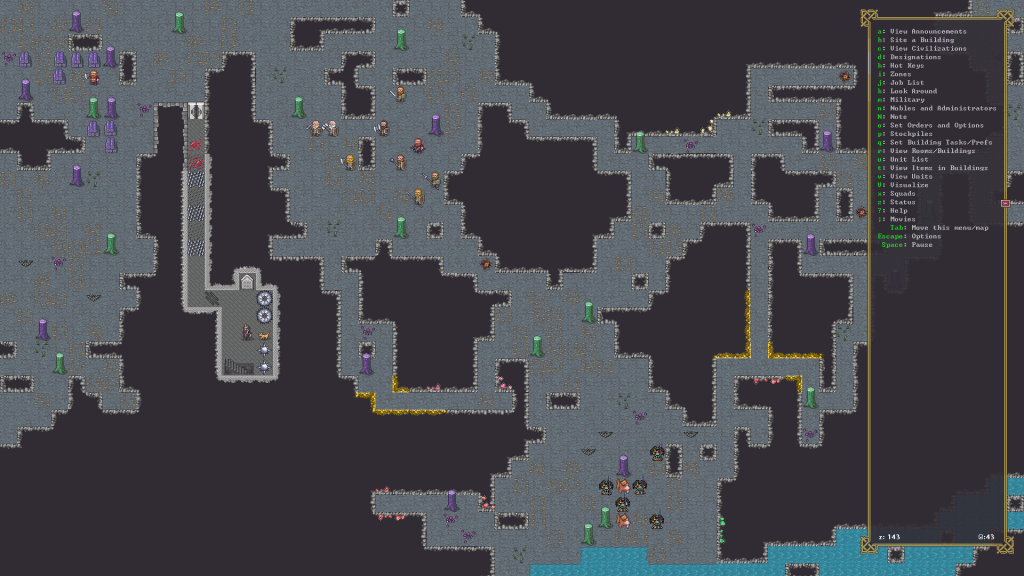 Above: Dwarves and caves go together like chocolate and peanut butter. Until the goblins show up.

Dwarf Fortress has been around so long that it’s fair to wonder why Bay 12 is putting it on Steam now (with a facelift).

“We’re getting older, and health care costs are a scary thing. We’ve been crowdfunding for more than a decade, and it has been great, but it should be the last resort for that sort of expense,” Tarn said. “But it’s a great opportunity to make lemonade from lemons, and so we’re going to use this chance to bring Dwarf Fortress to more players.”

I was also curious why Kitfox wanted in on Dwarf Fortress.

“Tarn from DF and [I] have been friends for some years now, and worked together on a couple of textbooks, so we’ve developed a sort of trust with each other, as humans,” Short said. “[I speak] often on procedural generation, and so far, all Kitfox-related titles — Shattered Planet, Moon Hunters, The Shrouded Isle, Six Ages, Boyfriend Dungeon — have had procedural elements … so from Kitfox’s perspective, it’s a great fit. We just have to hope our audiences will get along and play nice in the Discord.”

Steam may seem obvious, but with other stores such as Epic and Discord offering bigger cuts, I also wondered why Bay 12 and Kitfox choose Valve.

“Kitfox has a great relationship with Valve, and has always been pleased with the amount of control and visibility we have managed to get on Steam, so it was our natural first choice,” Short said. “We’d usually opt for more stores rather than fewer, assuming nobody offers us huge sums of money to be exclusive, but it’s up to Epic which games they want to offer their customers on their store. If they’re interested in working with us, I assume we’ll hear from them soon.”

Dwarf Fortress will continue to have a free version, or one without the new sounds and graphics, so you can still buy that in the future, too. But if you’re a nincompoop like me — or just want a version of one of the most important games of the past 20 years in which it’s easier to tell the difference between a goose and a goblin — you now have that option.